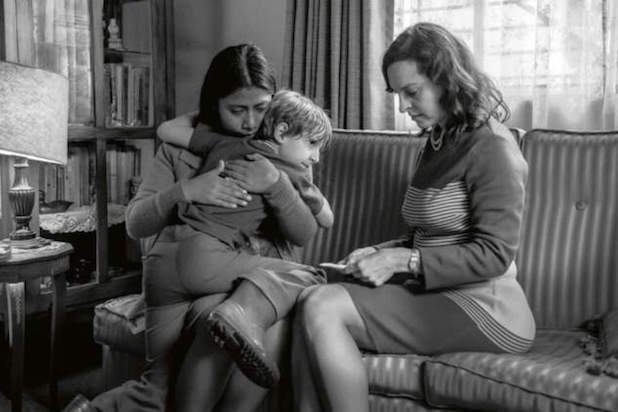 “The Favourite” lived up to its name until the last minute at the EE British Academy Film Awards, which were presented by the British Academy of Film and Television Arts (BAFTA) on Sunday in London. But in the homestretch, “Roma” director Alfonso Cuarón won the best director award, and then his black-and-white memory piece was named 2018’s best picture.

“The Favourite” settled for seven wins, by far the most of any film. Yorgos Lanthimos’ twisted period drama won for lead actress Olivia Colman and supporting actress Rachel Weisz, as well as awards in the original screenplay, production design, makeup and hair, costume design and Outstanding British Film categories.

In addition to Best Film and Best Director, “Roma” won in the cinematography and Best Film Not in the English Language categories. The wins capped a wild weekend for Cuarón in which he did a Q&A in London on Friday evening, flew to Los Angeles on Saturday for another Q&A and for the American Society of Cinematographers Awards (where he lost to “Cold War”) and then returned to London for the BAFTAs on Sunday.

In a tightly competitive year at the Oscars, the win for “Roma” adds to an awards résumé that also includes wins at the Critics’ Choice Awards and Directors Guild Awards, keeping the Netflix film in the running as one of the leading Oscar contenders.

Rami Malek was named best actor for “Bohemian Rhapsody,” while Mahershala Ali won the supporting-actor award for “Green Book.” Both men have become prohibitive favorites in the Oscar acting races, while Olivia Colman’s win suggests that she can still challenge Glenn Close in the best-actress race.

The effect of Weisz’s win for supporting actress is harder to gauge, because Regina King, who has won almost every award for which she’s been nominated for “If Beale Street Could Talk,” was not nominated by BAFTA.

“Vice” won for editing, “Bohemian Rhapsody” won for sound and “Black Panther” won for visual effects. In the music category, which mixes original scores with songs, “A Star Is Born” won for its songs, with Lady Gaga, Bradley Cooper and Lukas Nelson being singled out.

“The Favourite” had gone into the show with the most BAFTA nominations, 12, followed by “Bohemian Rhapsody,” “First Man,” “Roma” and “A Star Is Born” with seven each.

Director Bryan Singer was originally singled out as one of three “Bohemian Rhapsody” nominees in the Outstanding British Film category, but after voting closed his nomination was suspended following accusations of sexual misconduct. Producer Graham King and writer Anthony McCarten remained the film’s nominees of record, with a BAFTA statement saying that Singer’s nomination would remain suspended “until the outcome of the allegations has been resolved.”

In the 71 years that BAFTA has been handing out awards, its choice for the year’s best film has agreed with the Academy Awards’ Best Picture winner only 26 times. Recently, BAFTA and the Oscars matched six years in a row between 2009 and 2014 – but since then BAFTA winners “Boyhood,” “The Revenant,” “La La Land” and “Three Billboards Outside Ebbing, Missouri” went on to lose at the Oscars to “Birdman,” “Spotlight,” “Moonlight” and “The Shape of Water,” respectively.

Still, BAFTA remains a fairly accurate Oscar predictor overall: Last year, in the 19 categories that overlap between the Oscars and BAFTA, the BAFTA winner went on to take the Oscar 14 times.

Also Read: 'The Favourite,' 'Roma' and 'A Star Is Born' Lead BAFTA Nominations

The British Academy Film Awards are taking place at the Royal Albert Hall in London, and are being hosted by actress Joanna Lumley.

Here is the complete list of nominees. Winners will be indicated by *WINNER.