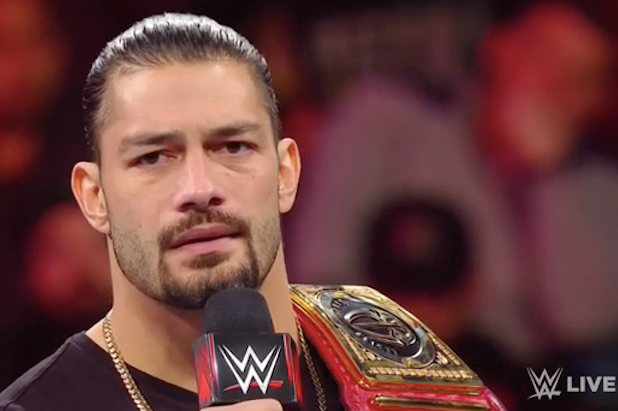 In addition to a quick press brief sent to TheWrap and others via email, WWE chairman and CEO Vince McMahon tweeted out the (hopefully) good news on Thursday. The boss hashtagged his post with #fighter, #proud and #classy.

.@WWERomanReigns (aka Joe Anoa'i) will address the status of his fight with leukemia this Monday on Raw. #fighter #proud #classy pic.twitter.com/kgXD8SHwVc

Anoa’i, a leader in the locker room and the face of the pro-wrestling company, stunned a “Monday Night Raw” crowd in October when he revealed an 11-year battle with cancer. The disease had been in remission until a recent diagnosis.

Reigns, who was WWE Universal Champion at the time, surrendered the top “Raw” title at the very top of the show.

“For months now, maybe even a full year, I’ve come out here and spoke as Roman Reigns and I said a lot of things. I said that I’d be here every single week. I said I’d be a fighting champion, I said that I’d be consistent and I said that I’d be a workhorse but…that’s all lies,” Reigns said in the middle of the ring to open the show. “That’s a lie because the reality is…my real name is Joe…and I’ve been living with leukemia for 11 years. And unfortunately, it’s back.”

Also Read: Chyna Fans Split on WWE Hall of Fame Entry as Part of DX and Not as Solo Act: 'Load of Bollocks'

“By no means is this a retirement speech,” Reigns promised at the time. “I will beat this, I will be back, and you will see me very, very soon.”

Also Read: D-Generation X to Be Inducted Into WWE Hall of Fame Class of 2019

Monday’s episode will air live from the State Farm Arena in Atlanta.