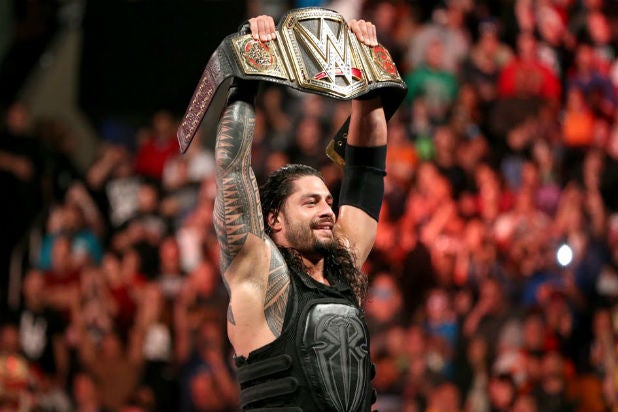 Roman Reigns may be “The Guy,” but for the next month he’ll be sitting on the sidelines.

WWE has suspended Joe Anoaʻi — aka Roman Reigns — for 30 days effective immediately for his first violation of the company’s talent wellness policy.

“I apologize to my family, friends and fans for my mistake in violating WWE’s wellness policy,” Reigns tweeted on Tuesday. “No excuses. I own it.”

Reigns — a Vince McMahon favorite who has struggled “getting over” with some fans — lost the WWE World Heavyweight Championship title on Sunday to Seth Rollins, who in turn, immediately dropped the belt to Dean Ambrose. Rollins and Reigns squared off in a No. 1 contender’s match last night on “Monday Night Raw,” which resulted in a double count-out. The three former Shield members are set to battle in a Triple Threat match on Sunday, July 24 at the Pay-Per-View event “WWE Battleground.”

The WWE has not removed promotional materials for that match, nor did the company respond to TheWrap‘s request for comment on whether or not it is still on as advertised. Technically, July 24 is 34 days away, so at the moment, it appears that he’ll feature in the show’s main event.

No further details of exactly how Reigns violated the company policy were released. Readers can gather more details about the comprehensive program here.