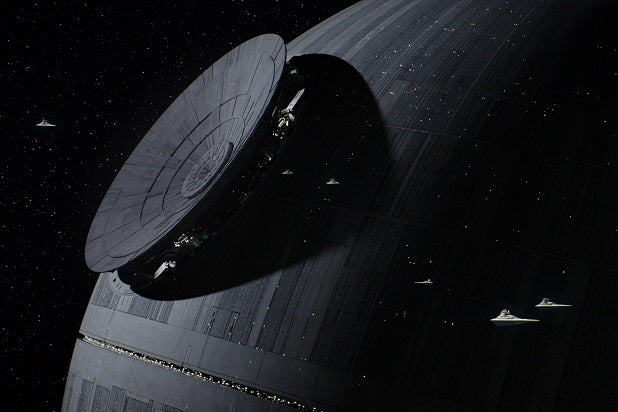 Director Ron Howard teased the Death Star in the untitled “Han Solo” movie by showing off the helmet of Imperial personnel inside some kind of military base occupied by the Galactic Empire on Wednesday.

The image of the set features an Imperial Navy helmet worn by Death Star troopers along with a panel that looks very similar to the one Luke, Han and Chewbacca would encounter throughout the original “Star Wars” trilogy.

The Oscar winner followed up the pictorial revelation with a behind the scenes videos from Pinewood Studios in the U.K., along with the boast that he’s now hit 2 million followers on Twitter.

Behind the scenes @PinewoodStudios btw,I see I just reached 2 mil Followers. Wow! Thanks all pic.twitter.com/GRCYj26EQo

Howard stepped in to direct Disney’s untitled Han Solo movie last month, just two days after Phil Lord and Chris Miller were let go from the “Star Wars” spinoff. The directors had been at the wheel of the film, starring Alden Ehrenreich in the role that Harrison Ford made famous, for nearly two years. Physical production commenced in late January in the U.K., and the men completed nearly 17 weeks of shooting through May.

The film is still set for a May 2018 release. It will star Alden Ehrenrich, Donald Glover, Emilia Clarke, Thandie Newton, Woody Harrelson and Michael Kenneth Williams.