In the entertainment industry, friendships are a sometime thing: they bloom with each new project and too often, disappear in the breeze of first reviews.  But when Ron Silver entered your life it was for keeps; his love of life, his energy, his exuberant generosity, and his extraordinary breadth of mind made him someone whom you never wished to let go. 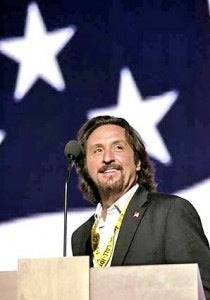 We first met many years ago in a Chinese restaurant whose name was known only to him, deep in the regions of downtown Manhattan.  He ordered off-menu in what was clearly imperfect Cantonese, but done with such conviction and commitment the waiter succumbed and willed himself to understand Ron’s every word (we later discovered he was a new hire from Taiwan who spoke only Mandarin but Ron was irresistible in any language)

In those early days our politics were antipodal (Ron would want that word in his appreciation and would not want its use marred by an in-text definition)  He still burned with the revolutionary zeal of the 60s, a fever that had drawn him to travel across the world in pursuit of an original ambition to become a diplomat — only to discover his kismet lay elsewhere (Kismet? He liked this kind of talk).

But even as an actor, the calling of public service was always close at hand.  It was perfectly logical that he became President of Actor’s Equity and equally predictable that, in that job, he would become the strong heroic voice of much needed change in the way that artists and management related and also lead Equity into the new era of collective bargaining and job definition – perhaps the first union leader to really understand what the 21st century would mean.

Almost obsessed with the millennium it made sense that his e-mail address would be NYC2K.  I looked forward to the Davos Conference each year, not for the pompous speeches of the world leaders but for Ron’s amusing pin-pricking of their hot-air balloons.