One of the most devastating scenes in “Room” takes place a few days after young mom Joy (Brie Larson) has freed herself and her five-year-old son Jack (Jacob Tremblay) from a seven-year captivity. Overcome with rage at having her life “destroyed,” she spits back the maternal advice she blames for leaving her vulnerable to abduction. “Be nice,” she hisses sarcastically at her mother (Joan Allen). Niceness only led her to an unimaginable hell.

It’s advice director Lenny Abrahamson (“Frank,” “What Richard Did”) and writer Emma Donoghue (adapting her best-selling novel) should have likewise ignored. Cousins of niceness, politeness and tastefulness, enervate their bifurcated drama, which is divided between harrowing confinement and tormented freedom. Tidy, trim, and meek, “Room” gets in its own way so much that it seems to apologize for what it is: an important exploration of post-traumatic suffering and resilience.

Until his fifth birthday, Jack knows of no other world than Room, the locked, window-less garden shed he has no idea is his mother’s prison. Shabby and outfitted with a single luxury (the small skylight above), it’s full of dingy, threadbare furniture, like the brown rug that’s reddishly discolored for reasons we can only guess at. But Jack is mostly happy there; his chief regret is that he can’t have a dog since, according to his ma, they only exist on other planets, like everything else on TV.

The tiny cosmos that Joy creates for Jack is lovely and fascinating and tragic, as is the one thing she’s allowed as a kidnapping victim: that her terrifyingly banal captor, Old Nick (Sean Bridgers), have no relationship with their son. Even Jack’s waist-long mane, so similar to his mother’s, serves as “evidence” that the boy is Joy’s alone. Old Nick makes sickening claims on every other aspect of Joy’s life and body — violations from which the young mother does her utmost to shield her son.

Halfway through the film, Joy concocts a far-fetched escape plan from Room that’s masterfully thrilling and suspenseful. Bombarded by noise, light, strangers, and a world that contains more than he thought possible, the suddenly free Jack resembles a snail that wants to retreat into its miniature home. The boy’s first full view of the real world — from a vertigo-inducing height in the hospital overlooking a futuristic cityscape that’s forbidding in its wintry grayness — is hardly inviting. 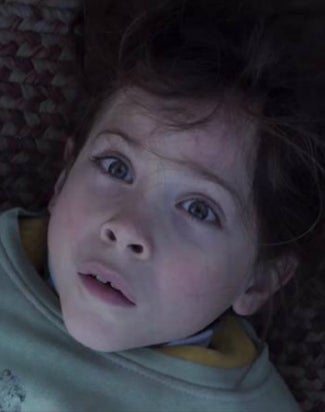 He eventually copes well enough. But his ma, who couldn’t wait to get back to the world, has more trouble leaving Room behind. In addition to the outburst about being trained in “nice” victimhood, the already emotionally volatile Joy falls into a spiral of desolation after an ill-fated television interview makes her question her parenting decisions.

Both the novel and the film anchor Jack as the POV character — a storytelling choice that might work better on the page than on screen. (I haven’t read the book.) One of the chief advantages of Jack’s first-person narration in the novel seems to its unreliability, which doesn’t cross over into the adaptation. The script’s centering of Jack means we’re stuck just getting glimpses of Joy’s much more engaging struggles while the camera stays focused on a character who has little conflict or complications of his own. The result feels like someone playing the piano with the sound dampener on, like music that’s afraid to affect and resonate.

Jack is also too young to grasp what happened to his ma, which robs him of an emotional arc that might otherwise offer the framing of the plot greater emotional potency. His desire to go back to being inseparable from his mother like they were before — it’s no coincidence that “room” rhymes with “womb” — never tugs on the heartstrings as much as it should. The story concludes when it just seems to run out of steam, unresolved plotlines be damned. Among the more conspicuous dangles is Joy’s relationship with her father (William H. Macy), who can’t bear to look at his grandson, borne of his daughter’s rape.

“Room” doesn’t ring out or resolve convincingly, but the film’s sensitive portrayal of Jack and Joy’s difficult transition to normalcy is elevated by Larson and Tremblay’s brilliant performances. Under those thickets of lashes, Tremblay may have the most intelligent eyes I’ve ever seen on a child actor, and he amuses with his innocence without crossing the line into cutesiness. (His Jack is graciously un-precocious.)

As she did in her breakout indie “Short Term 12,” Larson excels at determined despair, simultaneously evincing vulnerability and fearlessness. It’s an exciting, tour-de-force performance by an actress who announces herself as one of the best of her generation. If only the film around her were as bold.