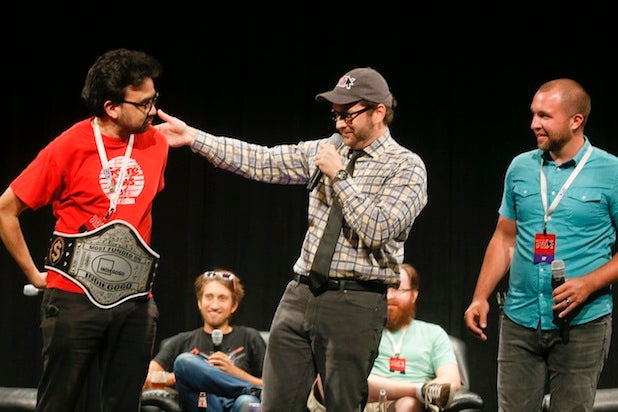 Rooster Teeth, producer of the popular web series “Red vs. Blue,” has mounted the most successful campaign for a film in the history of Indiegogo, the crowdfunding platform announced Monday. Lazer Team has raised more than $2.4 million, surpassing the previous record holder, “Gosnell,” a film about abortion doctor Kermit Gosnell.

“Lazer Team” surpassed its goal of $650,000 within 10 hours of launching, and has generated a steady stream of contributions ever since. A few film campaigns on Kickstarter have raised more than “Lazer Team,” including the “Veronica Mars” movie and the campaign to resurrect “Reading Rainbow,” but no other film has raised more on Indiegogo.

“Our audience has once again amazed us with their overwhelming, record-breaking support,” Rooster Teeth co-founder Burnie Burns told TheWrap. “We are proud to be the No. 1 most funded film on Indiegogo … and with a totally new property. In a world filled with sequels and reboots, Lazer Team is a brand-new IP being made possible by the people who want to see it.”

Rooster Teeth will begin production on the film in August, and hopes to release it spring of next year. Set in the late 1970s, the film is about a team of warriors tried by the U.S. government in collaboration with alien allies.

Burns told TheWrap shortly after the campaign launched that he hoped to score a theatrical release, and that he would use any extra money to increase the quality of the film.

“Historically we are movie guys,” Burns said. “I was a computer science student who wanted to learn about making films at the University of Texas. It was right after Robert Rodriguez made ‘El Mariachi,’ proving you could go make a movie and light the indie film world on fire.”