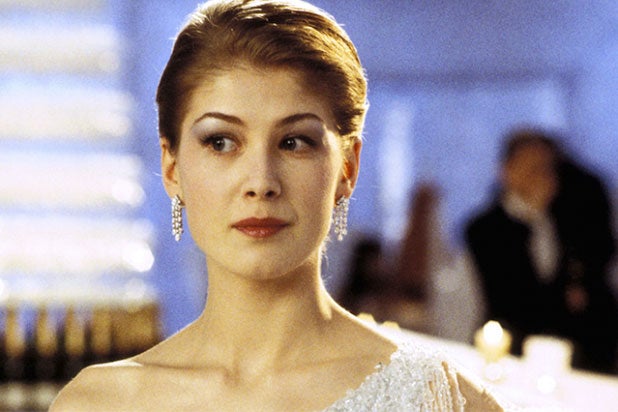 Rosamund Pike says she was told to strip down to her underwear during an audition for “Die Another Day,” a role she eventually got.

“My first audition was for a Bond film and I remember them saying I was to drop my dress and appear in my underwear,” Pike said in an “Audible Session” to promote an audio book of Jane Austen’s “Sense & Sensibility,” which Pike narrated.

“On the day, I don’t know how I got the resolve and strength of mind, but I just thought, ‘Actually sod that, if they’re gonna see me in my underwear, they better give me the job,'” she said. “So, I thought, ‘There’s no way I’m going to take off a dress in the audition for this tape to be sent around Los Angeles and to be judged on that.'”

See Video: Donald Glover Had to Audition for 'Solo' One More Time Than Alden Ehrenreich

She said she chose to wear her grandmother’s silk gown for the audition that required formal wear, but that the costume designer told her it wasn’t the type of gown women wear in “Bond” films: “‘That’s a very beautiful dress, but in Bond films we wear things a little more like this,’ and she held up three pieces of string.'”

“I realized I was in a completely different world and way out of my depth,” added Pike. “So, I put on this shimmering sheath, or whatever the order of the day was, but I didn’t drop it.”

She added that she felt comfortable on the set of the 2002 movie, which was directed by Lee Tamahori and starred Pierce Brosnan, Halle Berry and Toby Stephens. Pike, of course, starred as the femme fatale Miranda Frost in her feature film debut.

TheWrap has reached out to MGM and Eon Productions for comment.