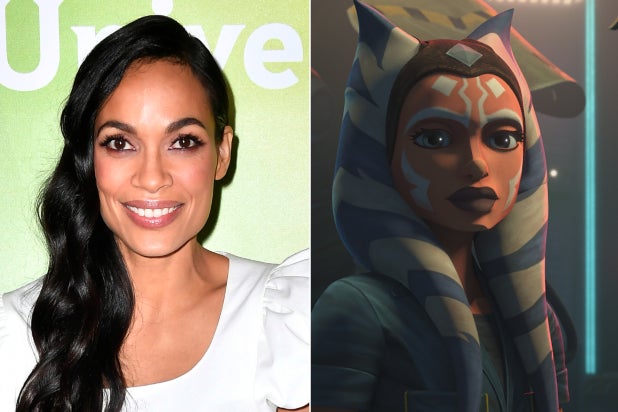 Rosario Dawson has joined the second season of “The Mandalorian” as Ahsoka Tano, the Jedi character introduced as Anakin Skywalker’s padawan during the animated series “Star Wars: The Clone Wars.”

The casting, which originally reported by Slashfilm, would mark the first time the character will appear in live action. Ahsoka is a key character not only from “Clone Wars,” but also the subsequent “Star Wars” animated series “Star Wars: Rebels.”

Representatives for Disney, Lucasfilm and Dawson did not respond to TheWrap’s request for comment.

Previously Ahsoka has been voiced by Ashley Eckstein up until this point, including a brief cameo in “Rise of Skywalker.” The character was first introduced in the 2008 “Clone Wars” film, and has also appeared in a slew of tie-in comics and novels. She is known for being the apprentice of Anakin Skywalker (before he becomes Darth Vader).