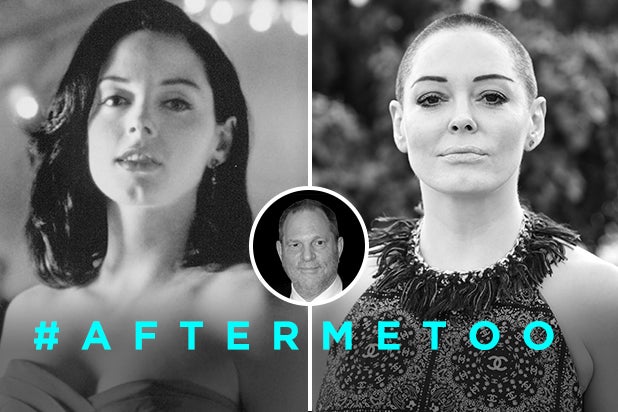 Rose McGowan, the star of “Scream” and “Charmed,” says she refuses to let the media reduce her “life’s work to a hotel room rape” despite the spotlight placed on her harrowing accusations against disgraced mogul Harvey Weinstein.

The actress, who has become a leading figure in the #MeToo movement since she accused Weinstein of raping her at a Sundance Film Festival hotel in the late ’90s, told TheWrap that the last year had been marked by extreme highs and lows.

“I had not anticipated the American — and I stress American — press tour being as salacious and triggering as it was,” she said.

Since coming forward with her story last fall, she has starred in “Citizen Rose,” a four-part docu-series on E!, become the first woman to win the Inspiration prize at the GQ Men Of The Year awards, gotten criticized for shouting at a transgender heckler at an event to promote her memoir and charged with felony charge of cocaine possession stemming from a January 2017 incident at Washington Dulles International Airport. (She has maintained that the drugs were not hers and may have been planted.)

But the hardest thing she had to go through this past year, she said, was watching the media’s “salacious” reaction to her January memoir, “Brave,” in which she exposed Hollywood abuse. “My book is about courage through adversity and how we can all be brave in our own lives,” she said. “Put it this way, if I’d wanted to write a tell-all, I could have burnt the town down.”

In August, McGowan suffered another setback when her close friend, #MeToo activist and fellow Weinstein accuser Asia Argento, was herself accused of sexual assault by an underage actor who had played her son in a movie — and agreed to pay him a $380,000 settlement.

Making matters more complicated, McGowan’s partner, model Rain Dove, informed the LAPD police of text messages suggesting that Argento had lied when she said that she never had sex with the actor, Jimmy Bennett, in a Marina del Rey, Calif., hotel room in 2013. (Argento has since changed her story, claiming she was assaulted by Bennett, who was then 17).

The story caused a rift within the #MeToo movement between those calling for compassion toward Argento and those who believed Argento should have been more forthcoming about the accusations leveled against her by Bennett.

“We fight not because we want to, but because we have to,” McGowan told TheWrap just before the Argento scandal broke. (McGowan did not respond to requests for a follow-up interview). “We know the truth. We learned the hard way. I’m incredibly proud of us. We dare.”

McGowan was a 23-year-old actress riding a wave of success with movies like Wes Craven’s 1996 hit “Scream” when she said Weinstein raped her during a meeting at the Sundance Film Festival in 1997. She said Weinstein summoned her to a meeting at a restaurant, which was later relocated to his hotel room. But a half hour into the meeting, she said, Weinstein held her down on the edge of a jacuzzi and raped her.

“I felt so dirty,” she later wrote in “Brave.” “I had been so violated and I was sad to the core of my being. I kept thinking about how he’d been sitting behind me in the theater the night before it happened. Which made it — not my responsibility, exactly, but — like I had had a hand in tempting him.”

McGowan reached a financial settlement with Weinstein, which was disclosed in last October’s New York Times exposé of Weinstein’s decades-long history of dealing with sexual misconduct accusations. (Weinstein has denied all allegations of non-consensual sex.)

Rose, first a simple question: How have you been?
F—ing awesome… I am alive, despite Harvey’s best efforts to push me to the edge. All of those working in service to a rapist have had a hand in trying to destroy me…. To have survived being both the instigator of a global storm and to be in the eye of the storm is an extraordinary feat and one that I can take pride in. I know what I have done, and I know where I’m going.

What have been the hardest things to deal with in the wake of talking about the rape?
Do you mean besides traitorous lawyers, traitorous literary agents, Black Cube and others being hired to corrupt my life, being falsely accused, arrested, having handcuffs on me before my rapist and being verbally assaulted and watched as sport?

The armchair quarterbacks who have never put themselves on the line for anything, filling the atmosphere with their nasty words, are things any freedom fighter in history has had to survive; they just did it without social media.

Honestly though, the hardest thing was my book, “Brave,” which I wrote to be of service to the world, being willfully misunderstood by many in the low-level American media who for years had been paid off to malign me by a monstrous serial rapist.

My book is about courage through adversity and how we can all be brave in our own lives. The American public was sold it as a tell-all… They, men and women alike, reverted to ingrained sexism by reducing my life’s work to a hotel room rape. What a bunch of dummies.

In some ways you have seemed like the avenging angel, who refuses to be deterred. Has this been an empowering experience, or a traumatizing one? Or both?
I have lived a life of much trauma, it’s just the way it shook out, but this past year was such an intensely condensed trauma, it took everything I had to withstand the gale-force winds. The thing about wind, though, it passes, and if you lean in, you’ll find you’re still there as it fades.

You are right, I am an avenger and I will not be deterred. I need no costume, I need no props. I need my voice, which is why they are so interested in silencing me.

The experience of seeing Harvey Weinstein indicted was cathartic for some, upsetting for others. How did it impact you?
There is no clear-cut answer, it is both traumatizing and triggering — with a slice of optimism thrown in. It’s all wrong. None of this should ever have happened to any of us. I damn those that had a hand in altering the course of our lives and helping him steal the sovereignty of our bodies and souls.

How has the #MeToo movement changed you?
It has caused me, as it has many, to reframe a lot of incidents. Put it this way, if I’d wanted to write a tell-all, I could have burnt the town down. Instead I left them the gift of consciousness. Waking up hurts, but so did your legs when you grew taller.

Can you talk about your connection to other survivors, and the community of women that has emerged?
We fight not because we want to, but because we have to. It’s a f—ed-up club to be in, but one that for all of us #MeToo survivors gives us a certain shorthand. We know the truth. We learned the hard way. I’m incredibly proud of us. We dare.

Finally, what is your hope for yourself, emerging from this period?
My goal in smashing a system has always been to see if I could make humans 10 percent more awake.