(Warning: This post contains spoilers for the season finale of “Ghosts” on CBS.)

During Thursday night’s season finale of “Ghosts,” Rose McIver’s Sam and Utkarsh Ambudkar’s Jay finally welcomed their first guests to the B&B after finding out that the Viking Thorfinn had put a Norse curse on the property to prevent the business from coming to fruition.

At first, the couple is willing to do anything to reverse the curse before they open their doors. But upon learning that might mean losing the ability to interact with the ghosts, they decide that a Norse curse is something they can live with. Though they could regret that now, considering as soon as they open the door to greet their first patrons, they fall right through the floor and into the basement.

It doesn’t look like the chaos at the manor is going to end any time soon, but McIver told TheWrap that’s perfectly fine by her.

“[The writers] surprise us at every turn. We might think that the dynamic is going to go in one direction based on the last episode, and then they come up with something that’s better than we could have predicted,” she said. “Every time they crack open another door of possibility just feels like this show really could be endless with potential.”

Viewers got to know the ghosts in real-time, right alongside Sam. When it came time for them to (almost) say goodbye, they gave heartfelt speeches about how they’d come to love each other. Even Jay, who can’t see the spirits, seemed a little bummed that their presence wouldn’t be felt anymore.

Sure, there were times when having the ghosts around wasn’t exactly convenient, like the time that they got into a screaming match while Sam and Jay were trying to host dinner for the neighbors. Or when Hetty possessed Jay. And, well, the whole curse situation itself. But when the time comes to let each other go, they realize they’d rather endure the frustration if it means keeping their new friends around. 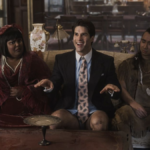 “It’s this big sort of rambunctious family that everybody brings different energies to, and that can be deeply frustrating and it can also be the thing that grows you and heals you. I don’t think Sam expects that when she goes into this new life, or that Jay expects it, because he’s able to kind of build friendships as well with some of the ghosts now and build relationships in these sort of abstract ways,” McIver explained. “I think for them, it is a total surprise that they care as much as they do about each other. But everybody has something to offer in the show.”

She added, “Everybody has a perspective or life experience or a worldview that the other ghosts and the livings can all learn from and we come to be this really symbiotic sort of thing that moves together and the idea of losing that is horrifying. It’s worth all of the stress and the frustration and the chaos. I think Sam realizes that, and that’s a really sort of potent way to end the season, is thinking about that.”

So, what were some of her favorite moments from Season 1? A tough question, she noted, before listing a few of the ones she really connected to. In particular, she reflected on Roman Zaragoza’s Sasappis — a Native American from the 1500s who has witnessed many of the other ghosts’ demises.

In the latter half of the season, we learn about his desire to be a storyteller after he tries to help Sam with some ideas for the B&B website. “I found Roman’s backstory as Sasappis really, really touching,” McIver said of the episode.

“I thought that was so beautifully woven into this current situation of two writers who both think they know the best way of doing things and we got to explore a real writer dynamic — which by the sounds of it is what a lot of writing partnerships are like — between Samantha and Sas,” she said. “But seeing where he’s from and why he wanted to tell stories and what he has come up against and what an achievement it is for him to be able to still share, that really tugged on my heartstrings.”

In the future, she hopes to see some of Sasappis’ relatives visit the property, either ghost or living. 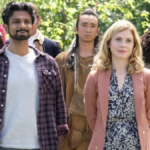 “That’s something I would love to see is contemporary characters coming to visit the property and him being able to have this great pride in his culture and how much they’re flourishing and, you know, contributing, especially as a writer,” she said. “He’s a writer and to see a contemporary Native writer would be something that I would really love to see.”

The actress couldn’t end our conversation without also giving a shoutout to Asher Grodman, who plays Trevor, an arrogant finance bro who died in the 1990s while playing pill roulette with some of his coworkers. McIver is struck by how likable Grodman manages to make the character, despite his being fairly problematic.

“I truly can’t think of another person who could make him as endearing as Asher has, and it is a really difficult role to play. And it speaks to his giant heart that we do feel through this very sort of specific perspective of a Wall Street finance bro,” she said. “I think they’ve done a great job with the writing of him but Asher’s heart really comes through on that character.”