Roseanne Barr waded into racial waters on Monday, suggesting that former Barack Obama adviser Valerie Jarrett is a product of the Muslim Brotherhood and the “Planet of the Apes.”

“muslim brotherhood & planet of the apes had a baby=vj,” Barr tweeted in response to a post about Jarrett.

Jarrett, who is African-American with no ties to the Sunni Muslim organization known as the Muslim Brotherhood, was one of most senior and long-term presences in the Obama White House and a lightning rod for right-wing critics.

Jarrett declined to comment; a rep for ABC did not immediately respond to a request for comment. 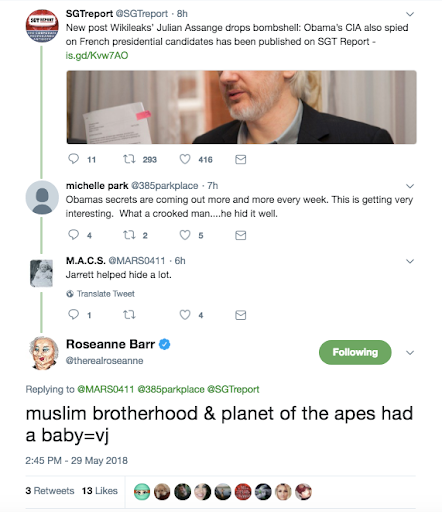 Roseanne brought up Jarrett in response to an unrelated Twitter comment on this article, which asserted that the Obama CIA had spied on the president of France. Jarrett’s name is unmentioned in the piece.

During the Obama administration, rumors swirled on right-wing blogs that Jarrett secretly intended to promote Islam in the United States and that she once expressed her desire to make America a “more Islamic country.” The fact-checking website Snopes ruled that claim to be false.

Also Read: Ratings: 'Roseanne' Finale Dips, But Still Beats 'The Voice' Finale - and Everything Else

Barr is currently starring in a wildly successful reboot of her old comedy series “Roseanne” on ABC, but has faced rising backlash from some online over her combative Twitter presence.

It’s not the first time Roseanne has raised eyebrows on Twitter. In the past she has also used the platform to promote conspiracies and fake news including this one, falsely suggesting that President Trump had secretly broken up sex trafficking and pedophile rings around the world.