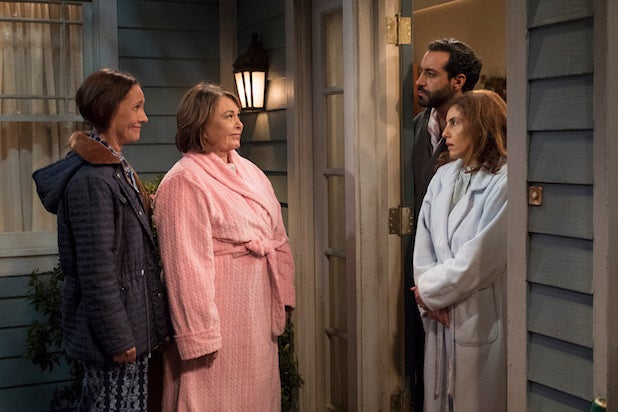 This week’s episode of “Roseanne” will show the titular character confronting her bias when she must ask her Muslim neighbors for their Wi-Fi password.

Co-executive producer Dave Caplan said that the idea to have the Conners have Muslim neighbors was Barr’s.

“Roseanne said, ‘what if a Muslim family lives next door?’ And all of the writers looked at each other for about five seconds and went, yeah, we’re doing that,” Caplan said in a behind-the-scenes clip at Entertainment Weekly.

“What if this is a sleeper cell full of terrorists getting ready to blow up our neighborhood?” Roseanne asks Jackie (Laurie Metcalf), in the episode, according to EW. “Any time something bad happens, it’s always somebody who lives next door to somebody.”

“She frightened of living next to Muslims because she has heard so many things on the news, and so she has a lot of pre-conceived notions,” Barr said in the clip. Jackie and Darlene (Sara Gilbert) try to convince Roseanne that she has nothing to worry about, but it’s not until she meets her neighbors for herself that Roseanne realizes you can’t believe everything you hear.

“She starts from being very fearful of this family that moved in next door that she doesn’t know, and once she gets to know them, she realizes there’s probably more similarities than differences,” Caplan said.

“I want people to laugh, that’s my main focus, is that it’s funny,” Barr added. “And in the funny, it’s kind of heartwarming.”

Caplan said that Barr wanted a “comeuppance” for her own bias. “It was her idea,” he said.

“I just thought it would be really relevant for a show about immigrants and prejudice, so we find a way to cut to the humanity of each other,” Barr said.

Watch the clip at EW.