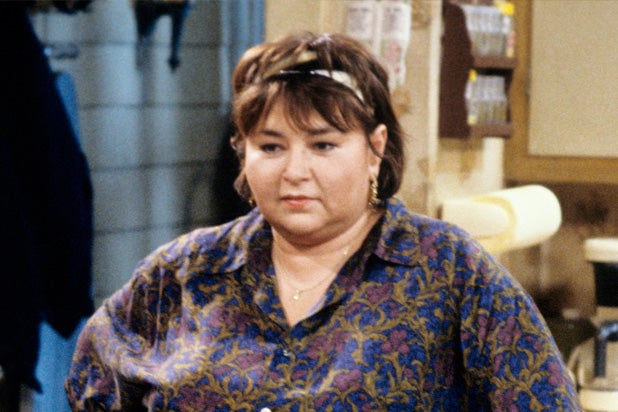 She did it again! Roseanne Barr’s big mouth is her undoing. It always takes her down, along with everyone around her. The death toll is legendary.

I stood witness to Roseanne’s first foray in Hollywood, from her comedy circuit “Domestic Goddess” act to her nine-season run of “Roseanne” from 1988-97. We always met after some crisis, like her screeching the national anthem in 1990.

That was a poor-taste joke, gone awry, a crisis of her own making, just like her problems today. At that time she blamed the critics. “I feel like I am under siege,” she told me. “I just can’t get out.”

And she accused her show writers of undermining her success. “They did real degrading things to me,” she said. “They’d attack me, then ignore me, then treat me like I was stupid.”

Hollywood was a terrible fit for someone as explosive as Roseanne. She fought with everyone, round after round, like a boxer who couldn’t give up. She filed a lawsuit against her former talent agency, Triad Artists, who she said tried to bilk her out of millions. She fired Matt Williams, the original creator, writer and co-executive producer of “Roseanne.” And for three years she said she did not speak to her boss, Marcy Carsey, the show’s co-originator, in the mistaken believe that Carsey had conspired against her.

But ABC Entertainment Group President Channing Dungey was no Marcy Carsey — she wasn’t going to take one more day of Roseanne’s tirades, tantrums and tweets.

Did Hollywood think Roseanne had changed because she’d lived a laid-back lifestyle on a macadamia farm in Hawaii? Did they know that, even in paradise, she filed a temporary restraining order against her neighbors complaining of harassment and trespassing? And did anybody read her Twitter feed in advance of the reboot? Tom Arnold, her ex-husband, said he did. “When I read her social media, before the reboot, I knew it wouldn’t end well,” he said of all her conspiracy theories.

Since the beginning, she has had a love-hate relationship with success. Once, I interviewed her in Iowa, where she was living on a 1,000-acre farm because, as she told me, she hated Hollywood. That is the same Hollywood that rescued her from the lonely life of the stand-up comic and who made it possible for her to buy the 1,000-acre farm.

“Everyone’s ripped me off in Hollywood,” she said. “In Iowa I can just be a person, not a machine.”

The problem is that machine keeps malfunctioning…

Also Read: Roseanne Barr Says She Feels 'Like Fighting Back': 'I Will Examine All of My Options Carefully'

This week, former Obama aide Valerie Jarrett joined the Hit List after Roseanne compared her to an ape. But there were so many others Roseanne crucified with her words — her first husband, Bill Pentland, her next husband, Tom Arnold, her sister Geraldine and even her parents — whom she once accused of incest.

Curled up on a sofa and holding a pillow on her lap, she said: “The thing about incest is that I love my father and mother. And what’s horrible is that the people you would love the most in the world would hurt you. And that bleeps up your head for the rest of your bleeping life… I’m in mourning because they are all dead to me.”

When Valerie Jarrett went on MSBNC the night Roseanne attacked her, she handled it with a level of grace and dignity that Roseanne could never understand. “I think we have to turn it into a teaching moment. I’m fine,” said Jarrett. “I’m worried about all the people out there who don’t have a circle of friends and followers who come right to their defense.”

I immediately thought of Helen and Jerry Barr, hunkered down in their Salt Lake City home, when my co-writer and I knocked on their door. (Remember when journalists knocked on doors and talked to people face to face?)

They had no MSNBC forum, no Twitter following, no way to defend themselves besides passing a lie-detector test, which their attorney Melvin Belli said they did “with flying colors.”

“For God’s sake we are not pedophiles,” Helen Barr told me, sitting at her kitchen table. Roseanne’s father, in a moment of complete despair, knelt outside the bathroom door to show us that there was no keyhole, no peephole, in which he could have seen a naked Roseanne, as she had charged. Denying incest, they did however admit with remorse to physical punishment of their children.

In the past few days, Tom Arnold has said that Roseanne’s problems have to do with mental illness or self-sabotage. She posted her fateful tweets on the very day the writers were due to return to work for the second season of the hit show.

I remembered back to when Roseanne told me how suicidal she had been in her youth. “I’ve been trying to kill myself since I was a child,” she said. “I remember being only 2 or 3 years old, going out to traffic on a real busy street. The truth is that I would walk into a real busy street and try to get run over.”

Finally, when she was 17, a passing car struck her and a head ornament impaled itself in the back of her head. She said the injury changed her forever. Soon after, she checked herself into a state mental hospital in Provo, Utah.

Neither fame nor money has seemed to quell that drive to self-combust — not an Emmy, a Golden Globe, or multiple American Comedy Awards for her show. At the end of her first run, she was earning $40 million per year, which made her at the time, the highest paid woman in show business after Oprah Winfrey.

But as Oprah chose the high ground for her career, Barr kept going low.

It is as if Roseanne is tone deaf when it comes to anyone’s feelings except her own. And by anyone I mean anyone who gave her a once- (now twice-) in-a-lifetime chance at success, collaborators like Wanda Sykes, the glorious trio of co-stars John Goodman, Laurie Metcalf and Sara Gilbert, and the hundred or so crew members who depended on her for their livelihood.

Roseanne blamed her initial tweet on Ambien. Then she kept lashing out at co-stars, critics — she just can’t shut up.

“[I’m] living life on the edge,” she once told me. “I don’t want to be normal. I couldn’t ever be even if I wanted to be. That’s where the fun is. I hope never to be boring.”

She kept her word. She tore the house down — again. No one is really safe in Roseanne’s realm.