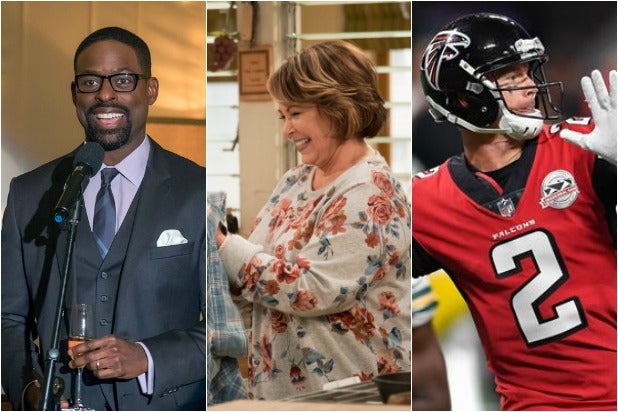 “Roseanne” is now the highest-rated show of the 2017-18 TV season, surpassing NBC’s “This Is Us” and even the No. 1 network’s “Sunday Night Football.”

As of the latest weekly Nielsen data stream covering results through April 15 — so, not counting last night’s steady episode of the ABC sitcom — the revived Conner Family classic is currently averaging a huge 6.7 rating in the advertiser-coveted 18-49 demographic, according to its host network’s tally. That gaudy number counts the show’s available delayed viewing — up to seven day’s-worth per episode — for its first three weeks back on the air.

Per data also provided by ABC, NBC’s “This Is Us” averaged a 5.4 rating and the same network’s “Sunday Night Football” scored a 5.9 rating over the course of their latest wrapped TV seasons.

Though that probably sounds totally cut and dry, it really isn’t. While the television season officially kicked off on Sept. 25, 2017, NBC aired three “Sunday Night Football” (“SNF”) games before that date. NBC counts those very high-rated games in “SNF” averages, ABC does not.

The two broadcast networks do agree that “This Is Us” finished its season averaging a huge 5.4 rating, which included a giant Super Bowl boost for one key February episode.

The marquee primetime NFL property isn’t the only TV series that ABC and NBC can’t agree on a rating for: The home to “Sunday Night Football” has “Roseanne” at a 5.9 on its own weekly ranker. The discrepancy there appears to be that ABC is infusing additional delayed viewing metrics for the third week of “Roseanne,” while NBC is sticking to a traditional measurement, which only counts “live” viewing for an episode that does not yet have “Live + 7 Day” data available.

It takes a while for that to come in.

Neither approach is necessarily wrong, it just depends how you look at it. It also should come as a shock to nobody that both NBC and ABC are touting Nielsen numbers that happen to benefit themselves.

The bottom line is “Roseanne” has received higher ratings than “Sunday Night Football” to-date. The cutoff is really the part in question, and everyone has a reasonable claim here to do what they are doing.

Going forward, the really issue will be Roseanne Barr’s sustainability with America. It’s currently unclear if “Roseanne” will finish the season at No. 1. The show seems to have leveled off, which makes it a bit more predictable — but the revival’s limited delayed viewing trends seem to suggest that the rest of the run will not finish with a “6” in front of each episode’s demo rating, making it somewhere between “possible” and “likely” that “Sunday Night Football” will rule again in the end.

Still, there ain’t no shame in being the top entertainment series of the season, or even the top comedy — check out how well that has worked for CBS’ “The Big Bang Theory.” Stay tuned to TheWrap to see how this all plays out.