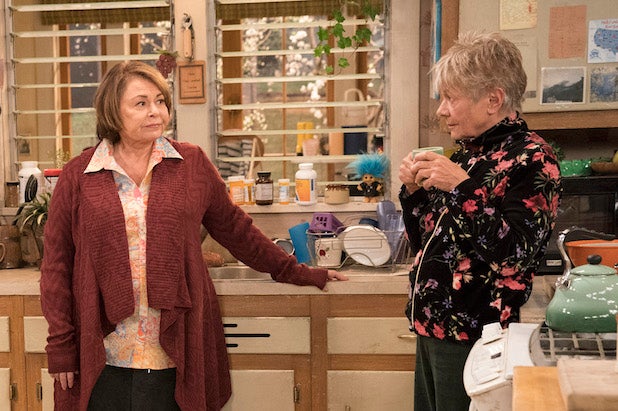 “Roseanne” keeps bringing ABC those impressive Tuesday primetime numbers, even when they are airing a marathon of repeats.

Last night, reruns of the revived sitcom filled up almost all of the Disney-owned broadcaster’s block (with the exception of a new episode of freshman series “Deception” at 10 p.m.) and landed the network in first for the evening in ratings, according to preliminary numbers from Nielsen.

However, ABC did not take the win total viewers, that went to NBC, whose new episode of “The Voice” at 8 p.m. still fared better than the “Roseanne” repeat in the time slot. But the comedy came back around again at 9 p.m., with an old episode that outshined the Peacock’s new drama “Rise.”

Over on The CW, “The 100” returned with a Season 4 premiere that was on par with its previous debut and a little ahead of its last installment’s season average.

ABC was first in ratings with a 1.2 rating/5 share in the advertiser-coveted 18-49 demographic and third in total viewers with an average of 5.3 million, according to preliminary numbers. Following the “Roseanne” repeat marathon, “Deception” at 10 posted a 0.8/3 and 3.2 million viewers.

CBS was fourth in ratings with a 0.7/3 and second in viewers with 6.3 million. The network’s primetime block was full of reruns of “NCIS” and “Bull.”

Univision and The CW tied for fifth in ratings with a 0.5/2.

Univision was sixth in viewers with 1.5 million.

Telemundo was seventh in ratings with a 0.4/2 and in viewers with 1.2 million.