A version of this story about Sara Gilbert and “Roseanne” appeared in The Race Begins issue of TheWrap Emmy magazine. The interview took place before Roseanne Barr’s fateful tweets about former Obama aide Valerie Jarrett that led to the show’s cancellation.

If you didn’t watch the “Roseanne” revival — because you thought it would be too political or don’t agree with Roseanne Barr’s public support of Donald Trump — executive producer and star Sara Gilbert might have changed your mind.

Gilbert, who plays Roseanne’s daughter Darlene and was a driving force behind bringing the Conners back to ABC, said that her biggest fear going into the premiere wasn’t that the show wouldn’t get watched, but that people who didn’t watch would make judgements based on “buzz.”

“My fear around people’s perception of the show,” Gilbert told TheWrap, “is that people would not watch and just listen to buzz and misinterpret what we are doing. So they might think we are going to represent one political party or be aligned with one idea, when the truth is, 200, 300 people make this show, and it’s a representation of all of our voices.” 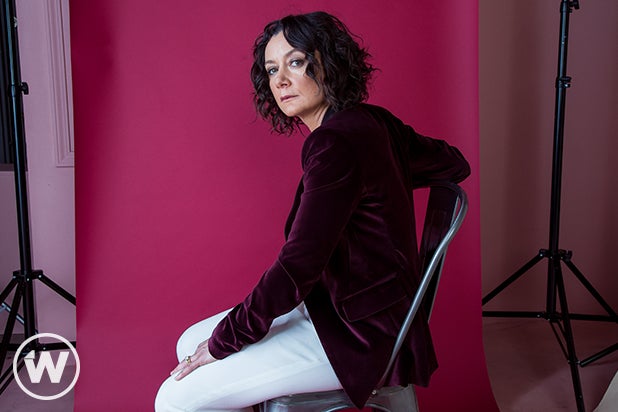 Gilbert maintained that the show’s politics always revolved around one question: “How do politics divide a family?”

The show did address that question, making it a central plot point in the first half hour. Darlene, who recently moved back in with her two kids, Harris and Mark, rebuffs Roseanne for allowing the election to come between her and Laurie Metcalf’s Aunt Jackie — “she’s dead to me,” Roseanne tells her daughter, for voting for “the worst person on Earth.”

It’s true that the first episode didn’t explicitly mention Donald Trump or Hillary Clinton, but Jackie shows up wearing a pussy hat and a “Nasty Woman” t-shirt — an undeniable nod to the former secretary of state. Jackie later admits Roseanne confused her so much she ended up voting for Jill Stein. The conversation turns to Roseanne’s bullying than their differing political views.

“It’s not about anybody’s policy or arguing why one side is right and one side is wrong,” Gilbert said. “So that was always my fear, that people wouldn’t watch and wouldn’t realize what we are actually trying to do, which is be a unifying force.”

Politics or not, people watched. The revival delivered ABC with its largest overall audience for its one-hour time period since November 2006, and the best demo rating since November 2009. The premiere earned more viewers than the 1997 finale.

Part of the reason for the revival, Gilbert said, was good business. “[Television] is such a saturated market — it’s very difficult just from a business standpoint just to get a large enough audience [to move forward with a show],” she said. The decision to remake a show, rather than come up with something brand-new, then, is at least in part “because they have a built-in audience at the start and then they can try to add to that.”

Gilbert said “it felt like a no-brainer” to bring “Roseanne” back to primetime. She said that the idea of a revival “was just bubbling up in me,” and that when John Goodman signed on, she knew that “this is the family that needs to be on television at this particular moment.”