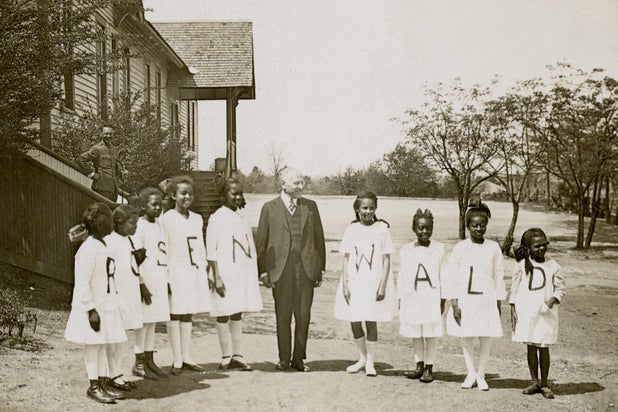 Philanthropist Julius Rosenwald would have been 153 years old this week and his incredible legacy of giving now will be known with the release of my documentary, “Rosenwald.”

The film premieres in New York this Friday at the Landmark Sunshine theater. I composed an essay about why I found this man’s life of giving worthy of a film. This tribute is my gift to this amazing American on his birthday.

With the issues of racial inequality in the news this film could not being coming at a better time.

Twelve years ago this summer, I attended a talk at the Hebrew Center on Martha’s Vineyard to hear my hero, civil rights activist Julian Bond, talk about the relationship between Blacks and Jews, a topic close to my heart.

Fully expecting to only learn more about the ’60s Civil Rights era, I was surprised to hear Bond speak enthusiastically about the partnerships that Sears CEO Julius Rosenwald forged with African American communities decades earlier. Rosenwald partnered with educator Booker T. Washington and African American communities in the South to build over 5,300 schools to supplement the very meager education provided in the Jim Crow South in the early 20th century.

A flashbulb exploded in my head, and I decided on the spot that I would make a film on Rosenwald. His story fit perfectly into my pattern of making documentaries about under-known Jewish heroes.

I was fascinated to discover that Rosenwald’s backstory sounded like a modern-day immigrant saga or a start-up success story. Rosenwald’s father emigrated from Germany with only $20 in his pocket. Julius Rosenwald himself left high school at 16 and became a budding businessman who bought into Sears and Roebuck. Even without a formal education, Rosenwald had the know-how to shape Sears into the largest retailer in the world.

Yet Rosenwald was not content with being just a very wealthy man. He was inspired by the Jewish doctrine of “tikkun olam,” repairing the world. Rosenwald was so moved after reading Booker T. Washington’s “Up from Slavery” and seeing the racial injustices in America that he concentrated on addressing the ills of racism.

He did more than build schools. Rosenwald supported the building of 27 YMCAs for African Americans coming North, but who were barred from most hotels. Rosenwald also constructed the Michigan Garden Apartments as rentals for middle-class blacks when there was a dearth of housing for them.

Rosenwald’s philosophy of “give while you live” had no bounds. Lucky for our culture he also created the Rosenwald Fund that supported African American artists and intellectuals who Julian Bond describes as “the list of people who were literally a who’s who of black America.” The Fund had the foresight to support those talents early in their career, the likes of Marian Anderson, Jacob Lawrence and Gordon Parks to name a few that are our national treasures. We should learn from Rosenwald’s generosity to support budding artists and thinkers.

Rosenwald’s legacy of correcting society’s ills during the Jim Crow period is just as pertinent today as America needs to address racial inequalities in our society.

Rosenwald is being released just as we need to confront and cure the dysfunctional racism in our land. It’s time we rework the fabric of America and remove the racist policies and practices that exist and instill some humanity.Our country needs to be washed clean of the hate. Let us collectively view this story of Julius Rosenwald, who heard the call for change one hundred years ago, and walk out of the theater motivated to act.

Together we can repair the world.

From Samuel L. Jackson as a U.S. President stranded in a Finnish forest in ”Big Game“ to the hell-bent transsexual prostitutes of ”Tangerine,“ larger-than-life characters abound