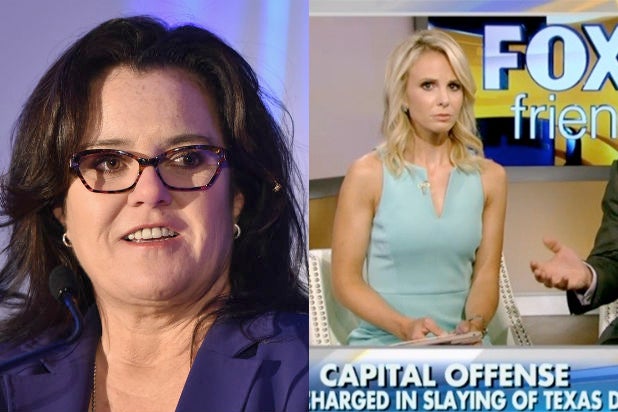 Rosie O’Donnell has taken offense at her former “The View” co-host Elizabeth Hasselbeck’s comments about the #BlackLivesMatter movement.

“Hasselbeck asked, “Kevin, why has the Black Lives Matter movement not been classified yet as a hate group? …” some r slow 2 wake,” the comedian shared on Twitter Monday.

The retort is in response to the comments Hasselback made during the day’s episode of Fox News’ “Fox and Friends.”

“Why has the #BlackLivesMatter movement not been classified yet as a hate group?” she asked a guest on Monday in response to the shooting death of a Texas deputy on Friday by an African-American suspect.

Deputy Darren Goforth was walking back to his patrol car at a gas station near Houston when Shannon J. Miles allegedly shot him in the back and unloaded his 14-clip pistol. Authorities called it an “execution style” shooting and claim Goforth was targeted because of his uniform.

“I mean, how much more has to go in this direction before someone actually labels it as such?” Hasselbeck said.

Miles, who was arrested Saturday, has a criminal record that includes convictions for resisting arrest, trespassing and disorderly conduct with a firearm. It is not clear that he has any connection to #BlackLivesMatter protesters.

On Tuesday, Hasselback also responded to the controversy over her comments, saying on Twitter, “My calling @foxandfriends is to ask questions and my calling as a #Christian is to #LoveAllGodsPeople -I give my best to do both each day.”

O’Donnell and Hasselbeck have a long history of disagreements over political matters, stemming back to on-air screaming matches in 2007 when they were both co-hosts of “The View.”

Hasselbeck asked, “Kevin, why has the Black Lives Matter movement not been classified yet as a hate group? …" some r slow 2 wake