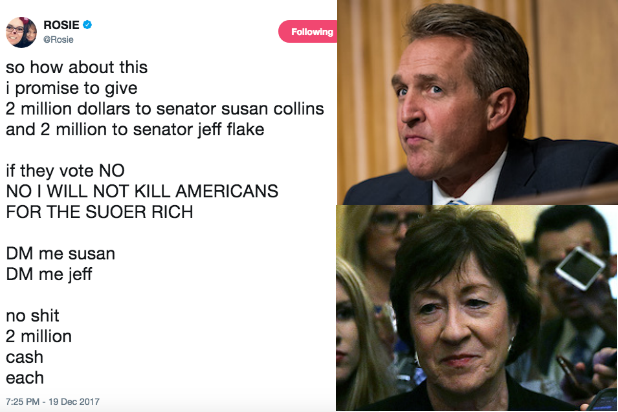 On Tuesday, Rosie O’Donnell tweeted a lucrative offer to GOP senators Susan Collins (R-Maine) and Jeff Flake (R-Ariz): If they’d have voted against the GOP tax bill, she would give them $2 million each. Neither senator took her up on the offer, and both voted in favor of the tax bill, but O’Donnell was nonetheless accused of openly trying to bribe sitting politicians.

However, legal experts tell TheWrap the actress and former “The View” co-host isn’t in any serious danger of being charged for bribery.

Also Read: Rosie O'Donnell Dragged for Offering $4 Million to 2 GOP Senators If They Voted Against Tax Bill (They Didn't)

According to Philadelphia-based attorney Lathrop B. Nelson, who has written about bribery and corruption cases, O’Donnell’s offer looks like attempted bribery if you “just sort of check the boxes off.” But, he says, she would be able to make a strong case that her offer as a political statement and not an actual offer of money in exchange for political favors.

“What you really need to take a look at is the intent factor and requirement to be convicted of a bribery charge,” Nelson says. “And, you know, she does say, ‘I promise,’ she does say ‘no s–t’ and she does make a specific request for Susan Collins and Jeff Flake to direct message her.”

DM me susan
DM me jeff

no shit
2 million
cash
each

“But if I was Rosie’s counsel,” Nelson continued, “I would make a very strong argument that this is political discourse on Twitter without any real intent at all to commit a violation of the bribery statute. And while she may have been trying to make a political statement, which I would have advised her not to make, I think there is a very good argument here that she did not have the intent to pay them $2 million.”

Asked for comment, a representative for O’Donnell referred TheWrap to a subsequent tweet that appears to support the argument the actress was making a political statement:

Abby K. Wood, an associate professor of law, political science and public policy at USC’s Gould School of Law tells TheWrap that, while O’Donnell may have been “serious” in her tweet, it’s unlikely to be taken seriously. In part because law enforcement likely has more serious priorities, and in part because it’s exemplary of the “crazy year we’re in.”

“At any given time they’ve got prosecutors working on corruption cases — actual corruption cases,” Wood says. “Which is why you aren’t seeing serious commenters making it an issue on Twitter.”

Woods added this is another “totally bananas example of 2017, which has been characterized by some pretty serious stuff being said out loud that you should never say out loud.”

“Trump tweets out stuff that incriminates him for things all the time,” Woods continued, calling it “just another example of what a crazy year we’re in.” If the offer became public as part of an investigation, Woods says the public might see it differently. “But if she tweets it out we’re rolling our eyes.”

Jessica Tillipman, an assistant dean at the George Washington University Law School who teaches an anti-corruption seminar, said she doesn’t think O’Donnell “actually knows the laws, or that she would be stupid enough to do that if she knew the laws,” which would be important context for law enforcement.

Part of the reason the U.S. has bribery laws is to ensure politicians act in the best interest of their constituents, Tillipman says. “In this forum, a public proclamation of, ‘I’m gonna give you $2 million,’ prosecutors would have to demonstrate corruption here and what she was intending to actually do, even if she’s making it pretty clear she’s ‘serious,’ adds the GW dean. “I don’t think she actually knows the laws, or that she would be stupid enough to do that if she knew the laws,” Tillipman says, arguing the exchange would need to be “a real concrete plan.” In the end, she says “it doesn’t strike me as a good use of a prosecutor’s resources.”