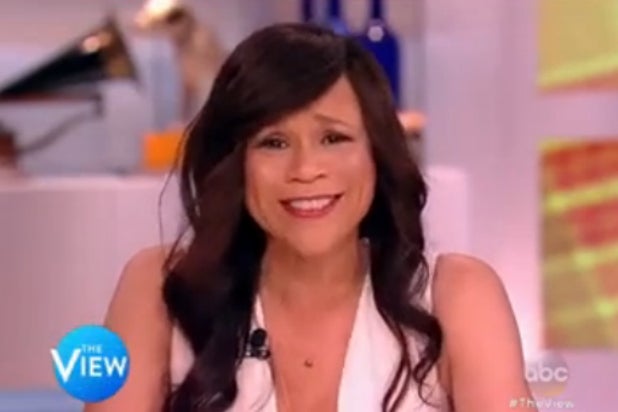 It’s hard to say goodbye, as Rosie Perez and her friends on “The View” found out on Wednesday.

A day after news broke that the star of Larry David‘s Broadway comedy “Fish in the Dark” will depart the ABC daytime talker at the end of this season, it was Perez’s moment to bid farewell to the show and her fans. As has been customary, the five panelists walked out to an appropriate song by the day’s musical guest — this time it was “Lovers Never Say Goodbye” by the Flamingos.

Perez, Nicolle Wallace, Whoopi Goldberg, Raven-Symoné and guest Michelle Collins danced to the ditty and cried it out before Rosie had a chance to speak. When she did, the tears flowed further and the words were heartfelt.

Also Read: Rosie Perez Will Not Return to 'The View' Next Season

“You guys all heard it. I’ve decided to move on,” Perez began. “I will say that today is very bittersweet for me.”

“I am excited for what is to come, but I am so sad to leave ‘The View,’ the staff, the producers, ABC, and especially these two ladies,” she said, referring to Wallace and Goldberg.

She then thanked the crew, each by name. Perez specifically gave heartfelt thanks to executive producer Bill Wolff and Disney-ABC Television Group president Ben Sherwood.

“But the ones I want to thank the most are the fans,” she said. “It warms my heart — it really does — every time one of you guys come up to me and say, ‘I love you on ‘The View.” It just makes my day.”

“And I really, really want to give a special ‘Thank You’ to the Latin community,” the actress concluded. “It’s a real honor to be the first Latina on ‘The View’ — what the hell took y’all so long? — your support on this journey as a community has helped me through this year, and I will never forget what you have done for me.”

Perez vowed to continue standing up for the Latin community — especially women — and to keep up with her AIDS activism. Perez also said that she will be back as a friend of the show, while returning to ESPN for upcoming boxing coverage.

Her fellow panelists and the audience gave her a standing ovation, chanting, “Rosie! Rosie! Rosie!”