Rosie O’Donnell’s planned return to daytime TV could be a major boost for the syndication business — if station owners know what’s good for them.

Unfortunately, as evidenced by the sorry state of local TV, the folks who run stations (and station groups), have repeatedly demonstrated an aversion to bold thinking and a consistent proclivity toward short-term thinking. No wonder, then, that wisened industry observers are already focused on all the reasons why the Rosie reboot could ultimately underwhelm.

Some of those concerns (outlined here) may be valid. But given how desolate the syndication landscape is these days — if you’re not airing "Ellen," "Dr. Phil" or "Dr. Oz," you’ve pretty much got crap — stations ought to put aside their worries and start clearing time for Rosie 2.0.

Here are four reasons why Rosie could once again be riveting — as well as three things O’Donnell and her team ought to do to make this new venture work:

–Rosie still boast a large fan base ready to check her out again.

O’Donnell hasn’t had her own show in nearly a decade, but she’s hardly disappeared from the pop culture landscape. Between her high-rated stint on ABC’s "The View," her high-profile blog and her daily Sirius chat show, O’Donnell has kept a connection with many of the viewers who loved her during her first go-round in daytime.

No, she’s not nearly as beloved as she was in her pre- 9/11, pre- "The View" days. Some folks can’t deal with O’Donnell’s blunt, sometimes shrill take on current events. 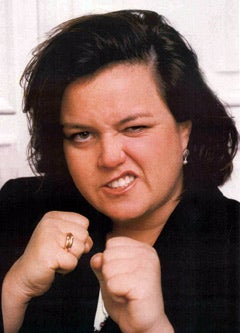 But the biggest hurdle facing most new syndicated shows is effectively marketing them in such a crowded media marketplace. Viewers know who Rosie is, and what she brings to TV; local stations who buy her show can be assured her return will at least get sampled.

And for those who argue O’Donnell is too out-there for mainstream viewers? Being polarizing hasn’t hurt Glenn Beck or Bill Maher. Isn’t a bit condescending to assume there’s not a female-heavy audience in daytime looking for someone who challenges conventional wisdom?

–Daytime needs a new forum for semi-serious conversation and big interviews in the post-Oprah era.

Ellen DeGeneres seems poised to inherit "The Oprah Winfrey Show’s" mantle as the go-to daytime destination for celebrities looking to hawk movies or albums. But it’s unlikely she’ll have much interest in interviewing John Edwards’ mistress or the parents of Balloon Boy — in other words, all those current events-driven media celebrities who need a forum outside of "Larry King Live."

Rosie 1.0 wasn’t a good fit for these folks, either. But New Rosie, with her interest in world events and politics, could be perfect for that role.

–Rosie would be a lot more advertiser-friendly than many daytime talk shows.

Sure, the second O’Donnell unleashes a prolonged rant against some bone-headed GOP congressman, the Parents Television Council will begin calling for an advertiser boycott. Heck, I wouldn’t be surprised if the PTC actually issues a pre-emptive jihad against O’Donnell, calling on local stations to declare that they wouldn’t dare air her show.

But somehow, some way, series with far more disturbing content issues — from "Jerry Springer" to more than a few court shows — managed to stay on the air, even without love from major national advertisers scared by the sleaze such shows shovel daily.

–Rosie would bring buzz and energy to a daypart sorely lacking in it.

While daytime shows such as "Dr. Oz" and "Dr. Phil" do well enough in the ratings, it’s not often you hear folks talking about them over the watercooler (or ye olde Twitter feed). "Oprah," and every once in a while, "Ellen," are about the only daytime strips with even a hint of pop culture relevancy. ABC’s "The View" also has the ability to go viral on a regular basis.

O’Donnell, with her well-defined views — and an ability to bring well-known celebs to her show — is able to break through the pop culture clutter. That’s no small asset at a time when the viability of first-run daytime syndication is in question.

As strong as the arguments for Rosie are, she’s far more likely to find success again if she takes the following advice to heart:

–Find a producer with TV experience you trust — and listen to her (or him).

O’Donnell’s NBC variety special was an unfortunate disaster because she either didn’t have anyone telling her she was making some wrong calls — or chose to ignore that advice. She can’t make that mistake again.

There’s no doubt O’Donnell knows what works best for her, and what her core fans want most from her. That said, even the most successful TV talents — including Oprah Winfrey — take notes from producers.

According to the LA Times, O’Donnell has tapped Rory Kennedy ("Ghosts of Abu Ghraib" to executive produce her new show. Kennedy’s filmography as a documentarian suggests she’s certainly in synch with Rosie’s political views. But there’s nothing on her resume to suggest she’s got what it takes to run a daily strip — something vital to the ultimate success of Rosie 2.0.

–Incorporate other views into the show.

Sure, Rosie and her point-of-view ought to be the centerpiece of any series bearing her name. But Bill Maher’s weekly HBO showcase works so well because he regularly brings in the opposition. Ditto Jon Stewart.

Since O’Donnell hasn’t publicly unveiled details of her new project, it’s unclear whether she plans to include a "View"-like panel. Doing so, however, might be a good way to ensure her new show is a lively forum for interesting conversation, and not a one-sided monologue.

–Maintain a wall between the serious stuff and the showbiz fun.

O’Donnell, despite those who would seek to caricaturize her as wacky left-wing lesbian nut, is actually a multifaceted personality with many and varied interests. Read the "Ask Ro" section of her blog, and you’ll see how easily she veers from conversations about 9/11 conspiracy theories into a breathless rave about the latest episode of "Glee."

Her new show will likely showcase all sides of her personality, but to work best, she ought to compartmentalize wherever possible. In other words, don’t let an interview with Justin Timberlake turn into a discussion of the war in the Congo.