Malex fans came close to their royal wedding on Monday night’s episode of “Roswell, New Mexico,” but in the end, no nuptials occurred. The good news is, they probably still will! According to series stars Tyler Blackburn and Michael Vlamis, a wedding between Alex and Michael is something they’ve wanted as much as the fans have.

“It was about time. I definitely felt that,” Vlamis told TheWrap of learning about this particular storyline. “I’ve been wanting that for a long time secretly, on and off set with Tyler. And so finally, you know, getting it on the show!”

Jokes aside, both Vlamis and Blackburn were pleased to know that the fans would be getting what they want from the writers, one way or another — even if there were some hiccups along the way. Of course, one of those hurdles is a bit more terrifying than the others, considering that Alex was dying from radiation poisoning in the pocket dimension, only to make it out alive and be immediately taken hostage by Clyde. But even so, Blackburn has some words of comfort for the fans, about the wedding that can still be.

“If the writers made this really unhappy ending, I think I would be pissed myself,” he said. “So, I don’t think you have to be too worried.” 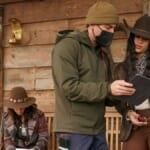 You can check out TheWrap’s full conversation with Michael Vlamis and Tyler Blackburn below.

Note: This interview has been lightly edited for length and clarity

I do want to start with you, Tyler. I’ve got a little bit of a bone to pick with you. Because here’s the thing: you went missing for a couple episodes, we didn’t see you at all. You come back, and you’re dying. And now you’ve been taken hostage. So why are you trying to stress us out?

Blackburn: (laughs). You know, we just kind of keep it really, really exciting in Roswell. You know what I mean? I feel like that’s always the goal, and the intention is to keep the cortisol levels high.

Vlamis: High highs, lows. That’s the name of the show.

Blackburn: Yeah, I don’t know. I feel like our relationship has always been tumultuous. And it’s like, now that we’ve been living together and we’re actually together, how do we create that sort of uncertainty within the relationship, even though we’re together? I think it kind of helps in that in that way.

Well, you certainly do a great job of keeping the cortisol levels high. More seriously though, you do make it back alive, but radiation poisoning doesn’t just go away, right? So how worried do we actually need to be for Alex here? 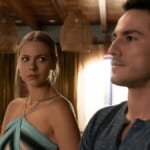 Michael, I do want to come to you, tell me your thoughts on this wedding. When you first heard that the engagement was even on the table, even if it is in a pocket dimension in the worst of scenarios, what was your reaction?

Vlamis: It was about time. I definitely felt that. I’ve been wanting that for a long time secretly, on and off set with Tyler. And so finally, you know, getting it on the show! No but, being serious, when I heard that, I just knew how much it would mean to the fans. I mean, there had been speculation that that was going to happen for so long. I’ve always wanted it to. I thought it’s what the relationship deserves you know? It’s been such a saga amongst these two guys. But yeah, I was just happy. It’s just what we deserved, and I had a feeling maybe it was going to be our last season so I was really excited about that, too.

Well, assuming this wedding is still in the plans, let’s talk wedding planning a little bit. What kind of cake will Malex be having?

Blackburn: I mean, I’m trying to think what Alex’s favorite cake would be. I know what mine is, think. I like a devil’s food cake. It also just feels like the genre, you know? No, I don’t know! I think we could get super creative, but I also kind of think they could be just like super simple, and classy together as well. But I don’t know.

Actually, you know, maybe they’re chocolate. Maybe it’s like a layer of chocolate and a layer of something else. Like a mixture of our personalities or something.

Vlamis: Yeah, he’s chocolate, I’m vanilla, but we still get along, you know?

Blackburn: Yeah exactly! We complement each other.

I mean, there’s layers to the relationship. There’s history!

Of course, what ends up happening is Guerin calls it off, because he refuses to marry Alex under the awful circumstances, and away from loved ones. It’s kind of this nice sense of security that it is going to happen. Michael, how do you feel about him really kind of making that final decision of like, “We’re going to be OK, so we’re not doing this now”?

Vlamis: I was excited about it primarily from an acting standpoint. It makes it even more interesting to know that you want to marry someone so badly, but deep down, you know it’s just the wrong way to do it. So that was really fun to play. Character-wise, it’s kind of the same thing. Like, give Guerin a mission, he’s gonna go off and have some fun. And that’s exactly what happens in this episode.

You guys touched on it a bit earlier but, I mean, the Malex fans. This is a rabid fanbase, they’re obviously gonna be happy for the engagement. What does it mean to you to be finishing out in this way for them and to have had them for as long as you have?

Blackburn: I think it’s incredible. I mean, as you know from watching “Pretty Little Liars,” I was part of a ship on that show that was really popular. And to feel like a similar magnitude, but with a gay relationship, has always been really exhilarating to me and comforting, actually, personally. So yeah, I think it’s incredible. And I think what Vlamis said earlier just about like, you know, this is what they wanted from the get go. And they’re getting it. You know what I mean? So it made me feel good. It made me feel like we did we did them proud.

Granted, Clyde is still standing in the way of this wedding — and really, everything, considering he now has the powers of every alien Bonnie’s ever kissed, including Michael and Max. What can you tease there?

Vlamis: All I can say is, Clyde gets what he deserves. He gets what’s coming to him.

“Roswell, New Mexico” airs on Monday nights at 8/7c on The CW. You can stream past episodes now online.