“Roswell, New Mexico” has one less deputy sheriff – at least for the time being. Unfortunately for Max Evans, it’s not something he chose for himself, but rather it’s yet another consequence of his doppelganger’s doing.

As we know, Jones hasn’t exactly been subtle in his killings. In his most recent — and potentially final — use of Max’s life for his own gain, Jones managed to track down Liz’s now former co-worker, Heath. Though he’s still alive, it doesn’t exactly bode well for the scientist, considering what Jones has done to basically every other Roswell resident he’s encountered. That said, they’re both after some intense alien science, so perhaps an unlikely alliance will form.

But like we said, Jones hasn’t exactly been covert up to this point, and it’s something the new sheriff has started to notice. Piecing together every bit of evidence she can find — dating all the way back to Noah’s death, apparently — she traces things back to Max, and puts him on notice.

You can watch the full exchange in TheWrap’s exclusive video above. 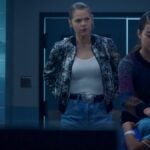 Arguably, there are pros and cons here. Obviously, one big con is the resulting lack of access to Max’s police resources that he and his friends will face. This likely means no criminal databases, no cell traces, nothing. But, on the upside, Max will be able to fully dedicate his time to helping Liz and the others. (It’s a sort of dim bright side, but it’s there).

Still, it’s important to remember that Jones has Heath now. And, in the race to the science of recreating The Dictator’s clones, Heath is going to be a key piece. As series star Heather Hemmens told TheWrap earlier this month,  Jones is “capable of evil beyond belief.”

With Heath under his thumb, Max, Liz and team have an uphill battle ahead of them.