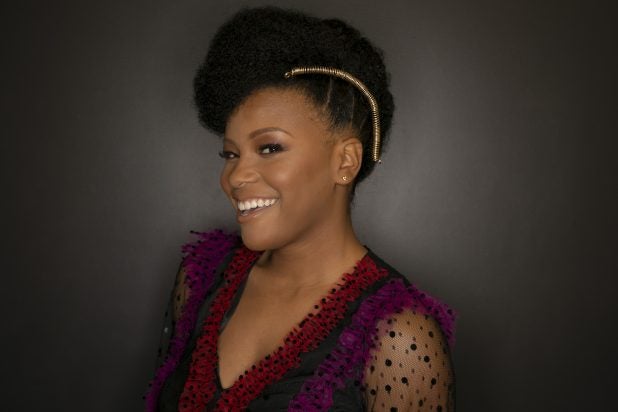 Producer Mimi Valdes got a call from Oscar-winning actor Mahershala Ali in 2016 and she nearly had a panic attack. Valdes knew Ali just rehearsed with the lead actress of her upcoming film, a newcomer who just signed on to the project days ago. Was she bad? Did she have to recast with only a few days left before the start of shooting?

“That girl is a star,” Ali reassured her.

That star is Chanté Adams, who joined Valdes at the Landmark Theatres in Los Angeles Monday for a Q&A and screening of their film “Roxanne Roxanne.”

Valdes had a reason to be scared at the time. This was Adams’ first role since graduating from Carnegie Mellon in 2016. The film’s casting director had seen her senior showcase and invited her to audition for the role. Adams sent in a tape, but she admits she had doubts she would even get a callback.

But in a year’s time, her performance as ’80s Queens rapper Roxanne Shanté would earn her a 2017 Special Jury Prize from the Sundance Film Festival for breakthrough performance.

“When I saw her tape, I cried,” Valdes told TheWrap’s Thom Geier.

It was a good cry, though there are plenty of reasons to sob in “Roxanne Roxanne.” The story follows Shanté and her family as she works her way up in the unforgiving world of the New York rap game. We first see Shanté when she is 13. Her father just fled with all of the family’s money. To keep her siblings and mother (played by Nia Long) afloat, Shanté resorts to shoplifting and even starting a relationship with an older, violent man (Ali) in order to gain a sense of stability.

But Shanté quickly finds the stability paper-thin. By the age of 14, her name begins to skyrocket when a song of hers is played on the radio. At the same time, Shanté’s life turns hellish as the people close to her begin to betray her.

“So many people are scared to tell stories about people we haven’t seen before,” said Valdes, who worked on the project alongside fellow “Dope” producer Pharrell Williams.

The untold story in “Roxanne Roxanne” is based on the true life of Roxanne Shanté. In 1985, Shanté released the track “Roxanne’s Revenge,” about shutting down the advances of flirty men. The track found its way to the airwaves and become so popular among local DJs that it inspired a series of remixes that repsonded to the original song.

The real Shanté was on set during the six-week shoot. She even had a hand in teaching Adams the best way to shoplift and rap with braces on.

“Braces are trash,” the Detroit native said with a laugh.

For Adams, getting a chance to work with Ali and Long was like getting her four years of schooling again in just six weeks. She signed on to the film eight days before principal photography and only had one day to rehearse with Ali, but she knew she would be in good hands.

“I got paid to take a master class,” she said.

“Roxanne Roxanne” is directed by Michael Larnell and was released on Netflix in March.