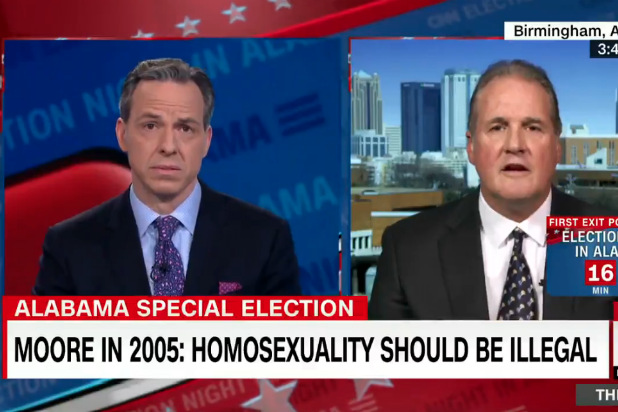 The spokesman for Alabama GOP Senate candidate Roy Moore caused many jaws to drop with an absolutely bizarre CNN appearance Tuesday in which he said that his boss “probably” wants to outlaw homosexuality.

Moore, running in a special election to fill the seat vacated earlier this year by U.S. Attorney General Jeff Sessions, said in 2005 that “homosexual conduct should be illegal.” Moore has never publicly walked that back, so CNN host Jake Tapper repeatedly asked spokesman Ted Crockett if Moore still believes that.

“Homosexuality is a sin in the biblical sense,” Crockett initially said. “That is where Roy Moore is in the state of Alabama.”

But, asked Tapper, “does he think that homosexual conduct should be illegal? It’s a yes or no question.”

Does Roy Moore think that homosexual conduct should be illegal?

Crockett followed that up by revealing a serious unfamiliarity with basic U.S. constitutional law. Asked to justify Moore’s position that Muslims should be barred from elected office, Crockett said the reason is that elected officials are required to swear on a Christian bible.

“You don’t actually have to swear on a Christian bible,” the CNN host pointed out. “You don’t know that?” Crockett asked. The result: several excruciating moments of silence from a bewildered Crockett. See that exchange below.

Roy Moore campaign spokesman responds with silence when asked if he knew people can be sworn in with a text other than the Christian bible pic.twitter.com/B65qIKBjlI

Suffice to say, reaction to Crockett was not kind. He embodied “EVERY single Alabama stereotype” said one Twitter user. “5000% stupid” said another. “Dumb as dust” one user said.

What century is Ted Crockett out of? This is what is "normal" in Alabama???

Man, Roy Moore's campaign spokesman (Ted Crockett) has an IQ so low that Roy Moore wants to date it.

Roy Moore's Campaign Spokesman. Ted Crockett..WOW! "Lawyers do this stuff." This guy's political and business acumen could fit on the head of a pin. #cnn #AlabamaSenate

And people of #Alabama ask where the stereotypes come from. Oy. What a total idiot. Ted Crockett SMDH https://t.co/6KaoxfLBBV

Ted Crockett: "I SWORE ON THE BIBLE THREE TIMES."

Jake Tapper: "You can swear on something other than the Christian Bible."

Donald Trump might not be the most dumbest person on tv afterall. @POTUS meet Ted Crockett

Claiming that Muslims should not be Congress because one has to swear on a bible, Roy Moore's spokesperson Ted Crockett is shocked to learn from @jaketapper on CNN that you don't ACTUALLY have to swear on a Christian bible. Crockett is speechless with his mouth open. LITERALLY.

OMG @jaketapper that was priceless. "You do not have to swear on a Christian bible, you know that right?" Long awkward pause from Ted Crockett. #Crickets. pic.twitter.com/phM89M9JD4

Ted Crockett is as dumb as dust,spokesperson doesn’t have a clue about swearing in protocols are.