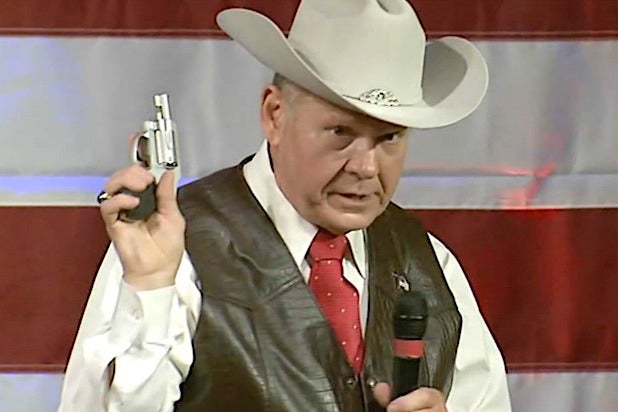 The wife of Alabama senate candidate Roy Moore wants you to know that the former judge is not an anti-semite. On Monday night, she told supporters at an election-eve rally in Midland City, the proof is that the Moores know plenty of Jewish people.

“Fake news would tell you that we don’t care for Jews. But I’ll tell you all this because I see you all, I just want to set the record straight while they’re here: One of our attorneys is a Jew,” Kayla Moore said. “We have very close friends who are Jewish.”

Roy Moore sparked much criticism a week ago when, during an appearance on American Family Radio, he said prominent Democratic donor George Soros is “pushing an agenda. His agenda is sexual in nature. His agenda is liberal and not what Americans need. It’s not our American culture. Soros comes from another world I don’t identify with. I wish I could face him directly and I’d tell him the same thing that no matter how much money he’s got, he’s still going to the same place that people who don’t recognize God and morality and accept his salvation are going. And that’s not a good place.”

Moore’s comments sparked calls for retraction and apology. However, through a spokesman, Moore denied any anti-semitic intent. “Judge Moore did not utter any anti-semitic comments,” said Moore’s campaign strategist Brett Doster. “He uttered anti-George Soros comments, and for that, there is no need for any apology.”

Suffice to say, reaction to Mrs. Moore’s comments was mixed, to put it mildly. Here’s a sample.

Jews have put up with a lot in this world—too much. They shouldn’t also have to be friends with Kayla Moore. pic.twitter.com/XRRoPxRDlJ

When Roy and Kayla Moore say they want to own a lib, they mean it literally

But the comments from Moore’s wife weren’t the strangest to come from the Monday night rally. That distinction goes to Bill Sailing, a supporter who says he served with Moore in the Vietnam War.

Moore is currently in a tight race for the senate seat vacated by U.S. Attorney General Jeff Sessions, largely because in early November, the Alabama Republican was accused by multiple women of sexual misconduct, including girls as young as 14. Moore has consistently denied the accusations, and at Monday night’s rally, Sailing appeared to back the credibility of Moore’s denial with a story about the time he and Moore accidentally visited a brothel that offered child prostitutes.

Sailing says he and Moore were invited by a third, unnamed man, to visit a private club at some point during their tour in Vietnam. But when they went into the club they discovered it was a brothel. “There were certainly pretty girls. And they were girls. They were young. Some were very young,” Sailing said. However, Moore was shocked by what he saw and according to Sailing, said “We shouldn’t be here, I’m leaving.”