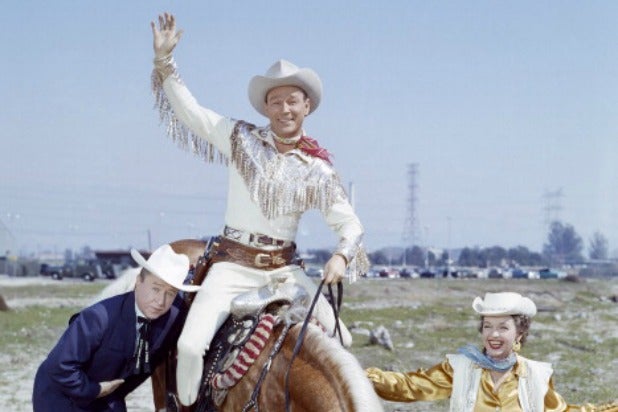 The Roy Rogers Family Entertainment Corporation, Happy Trails, LLC and the Spangler Group will produce a new Broadway musical inspired by Rogers’ life and music. (No word on his hamburgers.)The musical is expected in late 2014 or early 2015.

Brickman, who wrote the book for “Jersey Boys” and collaborated with Woody Allen on “Annie Hall,” is leading the creative team.

“I’m excited to be able to introduce Rogers to a new generation – and to re-introduce him to his older fans,” said Brickman. “At the height of his popularity, Roy had millions of fans worldwide and reigned for decades as the embodiment of simple, honest American values. It will be interesting to contrast that ideal with the current environment of ambivalence and moral uncertainty.”

Between 1945 and 1975, the Roy Rogers brand generated an estimated $1 billion in revenue derived from 88 films, the musical’s producers said. His TV show aired 100 episodes, and his name sold 150 million comic books. His image covered 2.5 billion boxes of Post Cereal.

Larry Spangler, head of the Spangler Group, and Happy Trails LLC CEO Wally Hoelzel have led the charge in developing this business deal.  Spangler stated, “We believe Roy Rogers represents a billion dollar brand.  His name and image will have broad appeal to people of all ages around the world.”

Bill Wolfe, CEO of International Marketing Partners, the company responsible for executing the licensing strategy, added,  “That belief is supported by the excitement of many of our manufacturing partners and key strategic retailers, already on board.  We’re introducing a broad range of products under the private ‘Roy Rogers’ label. We have over 100 new products in development and a number of products already in production.”