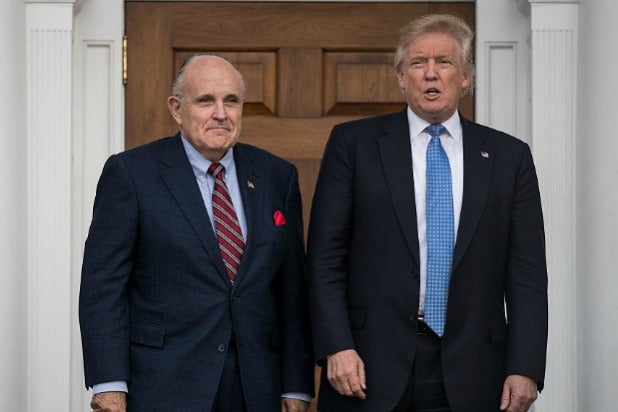 Donald Trump’s lawyer Rudy Giuliani is denying claims that he had a conversation with the president about a possible pardon.

The New York Times first reported Tuesday morning that Giuliani had a conversation with Trump “as recently as last week” about a potential preemptive pardon before the president leaves office. However, Giuliani tweeted in response that the conversation never happened.

“Fake News. NYT lies again. Never had the discussion they falsely attribute to an anonymous source. Hard to keep up with all their lies,” Giuliani said.

Giuliani’s spokeswoman told the New York Times, “Mayor Giuliani cannot comment on any discussions that he has with his client.”

It remains uncertain what Giuliani would be requesting a pardon for. Last year, he was investigated for business in Ukraine, as well as a plot to unseat the American ambassador in the country. Giuliani has also been a familiar face in Trump’s recent challenges to the 2020 election results, and worked to lead legal recount efforts in several states (though nearly all of the recounts found that Biden still won, sometimes by more votes than the prior count).

Giuliani’s lawyer, Robert Costello, spoke to the New York Times about the Ukraine inquiry, saying Giuliani is “not concerned about this investigation, because he didn’t do anything wrong, and that’s been our position from day one.”

Trump hasn’t addressed the incident publicly yet or indicated which way he might lean in pardoning Giuliani. The president is, however, notoriously liberal with issuing pardons, especially for close friends of the campaign or those who have done him favors in the past. Most recently, Trump pardoned Michael Flynn, the former national security advisor who was indicted for lying to federal investigators. That decision prompted pundits to assume Trump might grant clemency to other key members of his team as his time in office winds down, in an effort to protect himself from on onslaught of legal challenges.

In a recent episode of his radio show, Fox News host Sean Hannity suggested Trump use the pardon to just excuse himself and his family of wrongdoing, though it’s not entirely clear if that’s how it works. “I assume that the power of the pardon is absolute, and that he should be able to pardon anybody that he wants to,” Hannity theorized.

#FakeNews NYT lies again. Never had the discussion they falsely attribute to an anonymous source. Hard to keep up with all their lies.