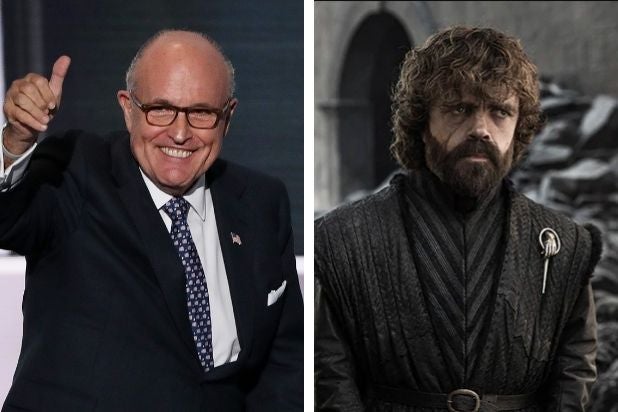 Rudy Giuliani says we have “Game of Thrones” to thank for part of the speech he made at last week’s Trump rally that resulted in a riot at the U.S. Capitol.

During Giuliani’s speech to a crowd of Trump supporters, he said “Let’s have a trial by combat!” not long before an angry mob stormed the Capitol building. Trump now faces his second impeachment after being charged with “incitement of an insurrection.”

But the former mayor of New York City claims he didn’t mean to incite violence with references to literal combat — he was simply channeling Tyrion Lannister.

“I was referencing the kind of trial that took place for Tyrion in that very famous documentary about fictitious medieval England,” Giuliani told The Hill’s White House reporter Brett Samuels. “When Tyrion, who is a very small man, is accused of murder. He didn’t commit murder, he can’t defend himself, and he hires a champion to defend him.”

When Samuels asked whether he was referring to “Game of Thrones,” which is certainly not a documentary, as Giuliani rather concerningly referred to HBO’s medieval fantasy series based on the books by George R.R. Martin, Giuliani said “100 percent.”

(For those who haven’t seen the series, Tyrion Lannister, played by Peter Dinklage, spoke of a “trial by combat” twice in the show. Once in Season 1 while he was on trial at the Eyrie, and in Season 4 when he was on trial again at the Red Keep. Both instances resulted in violence).

But Giuliani says it was all metaphorical.

“I’m talking about trial between machines. In fact, you’ll see it comes up exactly in the context of I challenge them to allow us to examine their machines. And then I say the consequences of the trial by combat will be if they prove that we’re wrong, we’ll be exceedingly embarrassed, we’ll be disgraced. If we prove they’re wrong, they go to jail,” he said.

He also insists the crowd was completely calm the whole time.

Also Read: After 'Game of Thrones,' 2 Women Are Leading HBO Into a Diverse New Era (Video)

See Samuels’ tweet and transcript of his conversation with Giuliani below.

I asked Rudy Giuliani about his call for "trial by combat" during last week's rally that preceded the Capitol riots. He first explained the concept by referencing Game of Thrones, then rejected the idea that he was referencing physical violence or that it incited the crowd. pic.twitter.com/J6HV5rVBBf

9 New Winter Shows Ranked by Premiere Viewers, From 'Call Me Kat' to 'Call Your Mother' (Photos)

Is it cold in here, or is it just "The Hustler's" TV ratings? TheWrap has ranked the Big 4 broadcast networks' (CBS, NBC, Fox and ABC) new series by the viewership for their winter 2020-21 debut episodes.

Thus far we have nine, with more on the way.