The report issued Friday says that propofol and Lorazepam — also known as ativan — were the primary drugs that caused the pop singer’s death on June 25, but Midazolam, Diazepam, Lidocaine and ephedrine also were detected in his system. 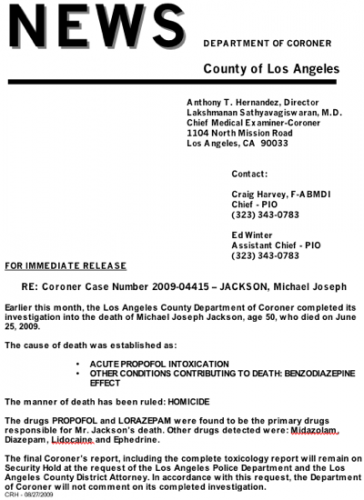 "It just means that Jackson died at the hands of another," she said, adding that the ruling does not mean his death was necessarily intentional or accidental.

"It’s likely that they’re working towards a criminal charge, but at this stage it would be absolutely premature to say based on a coroner’s report," Levenson said.

The ruling came in a news release given to the media on Friday, rather than in a full coroner’s report. It said the coroner had completed its investigation into Jackson’s death earlier this month.

The coroner had no comment on the completed investigation. The final report, including the complete toxicology report, will remain on security hold per request by the LAPD and the L.A. County District Attorney.

Murray’s lawyer, Edward Chernoff, told the Associated Press on Friday that he didn’t understand why only a brief summary of the results were issued to the public. Chernoff said the report seemed like "gamesmanship" and that he wants to know what levels of the drugs were detected.

Earlier this week, a law enforcement official leaked to the AP that Jackson’s death was being ruled as a homicide.

Police have been involved in an investigation focused around the doctors who treated the singer, including his dermatologist Arnold Klein and his personal doctor, Conrad Murray, who admitted giving the singer a combination of drugs hours before his death at a rented Los Angeles mansion.

However, through his lawyer, Murray said he had not administered drugs that would have caused the death.

Earlier, Murray told investigators he had been treating Jackson for insomnia. Because he was worried Jackson might become addicted to the propofol, he said he was lowering the singer’s dosage to 25 milligrams and adding Lorezepam and Midazolam to the singer’s drug cocktail.

That was the combination he gave Jackson two days prior to his death, and it helped Jackson sleep. The following day, Murray said he only gave Jackson the two sedatives without propofol.

But at 1:30 a.m. on June 25, he gave Jackson more drugs, starting with a 10-milligram dose of Valium. At 2 a.m., Jackson received two milligrams of Lorazepam, and two milligrams of Midazolam around 3 a.m. He had repeats of those doses at 5 a.m. and 7:30 a.m. Jackson still could not sleep.

So at around 10:40, after Jackson’s "repeated demands/requests" for propofol — which he called his "milk" — Murray gave the singer 25 milligrams of the drug. Jackson then fell asleep.

Murray said he stayed with Jackson for 10 minutes, after which he went to the bathroom. When he returned about two minutes later, Jackson had stopped breathing.

Though he disputes the claims, unsealed documents released by the Harris County District Clerk in Houston on Wednesday showed Murray waited 82 minutes before phoning paramedics.