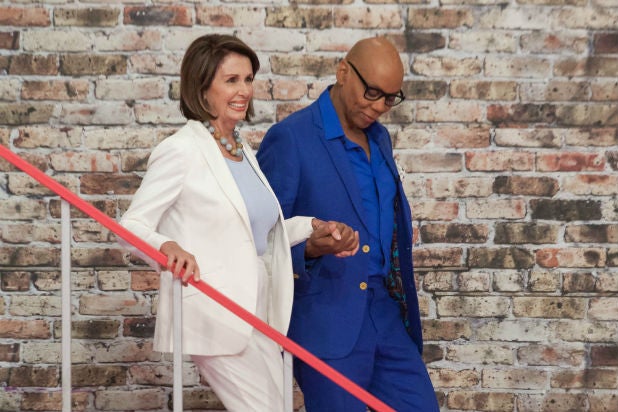 Democratic leader Nancy Pelosi paid a visit to the workroom of “RuPaul’s Drag Race” on Thursday’s episode, and instead of style tips or shady one-liners, she offered two simple instructions: resist, and vote.

The congresswoman made a quick cameo on the hit VH1 reality competition to crown America’s next drag superstar.

“When I got the invitation to visit the workroom, I couldn’t resist,” Pelosi told host RuPaul.

Pelosi, a San Francisco Democrat and former leader of the House of Representatives, hopes Democrats will retake the House in November, which would likely sweep her back into power.

Pelosi celebrated the girls — including popular queens Trixie Mattel and Shangela Laquifa Wadley —  and told said how much how they inspired her.

“I’m honored to be here.  You’re an inspiration, I hope you know, because you really know your power. It’s about taking pride, and thats what you do,” she said.

Mattel agreed, adding in an interview that “every time you get into drag, you’re making a political statement.”

Pelosi left the VH1 show with a final sentiment: Vote.

“Voting is everything …  it’s a blessing, but we have to use it. If you don’t vote, you don’t count. And you count.”