The production is the subject of the VH1 docuseries, “RuPaul’s Drag Race: Vegas Revue,” which is currently airing. Sims serves as co-director with RuPaul. Last week’s episode highlighted the dress rehearsal and opening night, which took place in late January. (The show — like most Vegas attractions — was shut down in March due to the ongoing coronavirus pandemic.)

TheWrap caught up with Sims to talk about opening night, that now-infamous Kameron Michaels salsa number, and what the TV audience didn’t see.

Episode 2 marked the first time Sims saw the backstage mayhem from the queens’ perspective. “I could feel the tension from the queens and the dancers,” Sims recalls from the nerve-wracking rehearsal. “Up until that show, we hadn’t done a full run-through cleanly that went without a hitch. There was either some technical thing or a change queen couldn’t make.  I was in my seat and my suit was drenched; I was sweating.”

In addition to the stage show, there was also the challenge of filming the docuseries. Sims was used to having cameras around while filming “Drag Race,” but “Live!” was a completely different beast with a different set, different crew, and a looming opening night. With essentially two productions going on at the same time, scheduling was the biggest hurdle.

“There were times where behind-the-scenes needed to get interviews from the girls and I needed them on stage. After rehearsal it wasn’t just over for them; they had to go and film,” Sims explains. Still, he credits the queens’ professionalism and previous experience on “Drag Race” on helping the production push through. “They know the drill,” he added. “Had this been their first time it would’ve been overwhelming.” 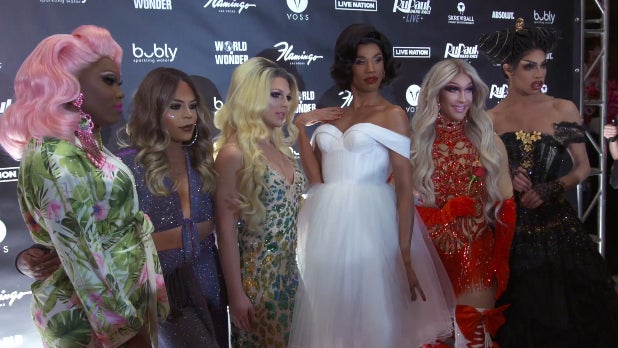 One thing that castmember Kameron Michaels did find overwhelming was the show’s salsa number, an intricately choreographed number that had the queen interacting with several of the backup dancers. Michaels expressed her fear about nailing the number, which was only made worse when RuPaul and Sims critiqued her on it during the dress rehearsal.

“Kameron is such a perfectionist that she gets in her head,” Sims said of the Season 10 alum. “When you’re under the pressure, the one little step that probably wasn’t that becomes this one big thing.”

Sims also revealed other behind-the-scenes tidbits not caught on camera, including the risky Derrick Barry ceiling drop that viewers saw in the season premiere.

“When she drops, the dancers have to release her from the actual line she drops from. That had never been done seamlessly before that night,” Sims says, shaking his head in slight disbelief. “That was a surprise.”

Of course, there was a hiccup as well. One queen wasn’t able to make her costume change in time, so Derrick Barry stepped up and performed her castmate’s line for her, without the audience even realizing.

Did the best queen win her season? We debate the winners of ”RuPaul’s Drag Race“ and its ”All-Star“ editions