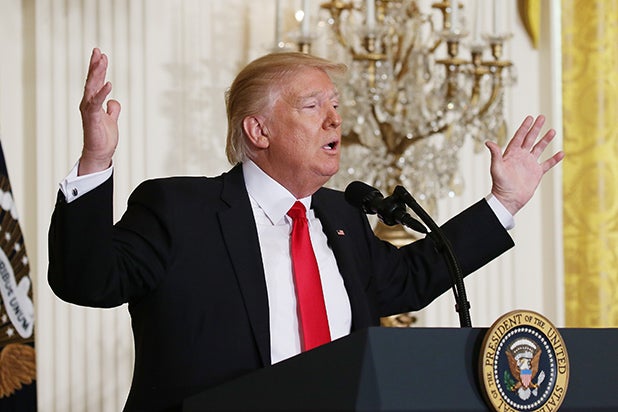 The editorial, titled, “A President’s Credibility,” goes on to say, “If he doesn’t show more respect for the truth most Americans may conclude he’s a fake president.”

The opinion piece starts off: “If President Trump announces that North Korea launched a missile that landed within 100 miles of Hawaii, would most Americans believe him? Would the rest of the world? We’re not sure, which speaks to the damage that Mr. Trump is doing to his Presidency with his seemingly endless stream of exaggerations, evidence-free accusations, implausible denials and other falsehoods.”

Murdoch’s Fox News Channel is praised by Trump on a regular basis, while he regularly mocks rivals CNN and MSNBC as “fake news.” However, the relationship between the president and Fox News isn’t always a smooth one. Trump recently cited remarks made by Fox News senior judicial analyst Andrew Napolitano as the reason why he accused former President Obama of wiretapping Trump Tower.

The accusation has since been debunked and the Trump administration has provided no evidence to substantiate the charge — or made any attempt to refute it. Napolitano has not appeared on the network since the drama unfolded and Fox News does not stand by Trump’s claim.

Fox News host Shepard Smith made the following statement shortly after Trump’s comments on Friday: “Fox News cannot confirm Judge Napolitano’s commentary. Fox News knows of no evidence of any kind that the now President of the United States was surveilled at any time, in any way, full stop.”

The WSJ editorial could be the first sign that Murdoch has had enough of Trump.

“Two months into his Presidency, Gallup has Mr. Trump’s approval rating at 39%. No doubt Mr. Trump considers that fake news, but if he doesn’t show more respect for the truth most Americans may conclude he’s a fake President,” the editorial concludes.