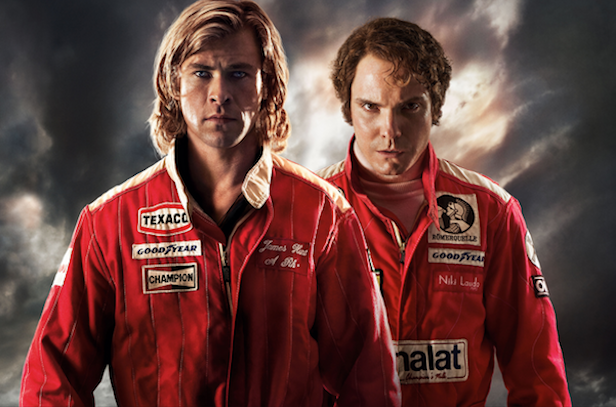 My introduction to Formula One racing was a friendship with Jackie Stewart. We met in the mid-’70s in Hollywood. No longer was he racing, but he loved parties and was very social. He enjoyed coming to my apartment in West Hollywood to mingle with the art world and folks such as Andy Warhol.

Totally unpretentious, he had reflexes as fast as lightning. He talked like a speed freak because he was one. Everything he did was quick. Most of all, I remember his quick wit and love of laughter.

He became known over the years for his safety advocacy as much as a race winner who won three World Drivers’ Championships. So when I watched “Rush,” obviously, memories of Jackie, who is now Sir Jackie, came back to me.

“Rush” is the true story about the testosterone-driven 1976 rivalry between two Formula One driving champions — James Hunt and Niki Lauda. It will heat up your Ray-Bans as you watch Chris Hemsworth portray Hunt and Daniel Bruhl star as Lauda.

Hemsworth has Hunt’s swagger and playboy charm down pat. I only missed the willing-to-die-for gaze in his eyes that Hunt had in his last photo in the film. Hemsworth has a glint in his eyes at all times, but not the deeply combative spirit that Hunt possessed. Sue Miller (Olivia Wilde) has a thankless role as Hunt’s wife for one year.

On the other hand, Bruhl has Lauda’s Austrian sensibilities down pat. Lauda’s knowledge of mechanics and precision, his intellect, made him a threat to Hunt. And Bruhl shows the perfect teutonic desire to win uber alles. Rarely do movies take us into an Austrian sensibility, save for Arnold Schwarzenegger, but Bruhl’s acting takes us there, as does the script by Peter Morgan. I enjoyed the journey into the competitive Austrian mind almost as much as the racing scenes shot with perfection.

Ron Howard directed this cinematic Grand Prix for the senses. And his use not just of racing but of sex scenes is stellar. He cuts all foreplay and breaks into the heat of the scene, which adds to the tension of the film and portrays a race-car driver’s sensibility.

The story is about Lauda being an intellectual driver and Hunt being a daredevil kind of driver. Indeed, before a race in Germany where the weather conditions have made the track hazardous, Lauda attempts to have the race canceled. Hunt disagrees, and prevails in a vote of the drivers. So the race is on and, alas, Lauda has an almost fatal crash, remaining trapped in his car as it burns. (The actual footage of this historic crash is not used.)

During Lauda’s recuperation, on the hospital television he watches Hunt in race after race win back a lead that Lauda had once firmly held. Lauda uses his rage, desire to win at all costs and envy of Hunt to heal and to race him once more, on a rain-battered track in Japan.

One of the themes of “Rush” is that anger, envy and jealousy — if channeled properly — can be positive emotions. They helped Laud to heal, which some may feel is more important than winning.