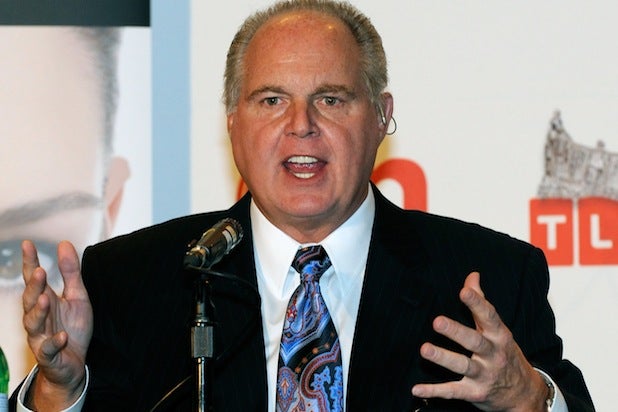 Conservative talk show host Rush Limbaugh is getting trolled on Twitter for leaving South Florida ahead of Hurricane Irma’s landfall after accusing the media of using the storm to push a “climate change agenda.”

Earlier this week, Limbaugh said on his show that those in “the official meteorological circles” are simply trying to push the idea “that climate change is creating more hurricanes and stronger hurricanes.”

He said that “bias is built in” to the hurricane coverage, and that media creates “fear and panic” in order to help retailers sell things like bottled water and supplies. “There is symbiotic relationship between retailers and local media, and it’s related to money,” he said on his Tuesday show.

“All you need is to create the fear and panic accompanied by talk that climate change is causing hurricanes to become more frequent, and bigger, and more dangerous, and you create the panic, and it’s mission accomplished, agenda advanced,” he said.

Now, however, Limbaugh is giving in to the “fear and panic.”

He announced Thursday that his nationally syndicated show, which tapes in South Florida, will not air on Friday. “I’m not going to get into details because of the security nature of things, but it turns out that we will not be able to do the program here tomorrow,” he said on Thursday. “We’ll be on the air next week, folks, from parts unknown.”

After backlash throughout the week, Limbaugh did concede on Thursday that Hurricane Irma is “gonna affect Florida no matter where it goes. And the effects in Florida, depending on where, are gonna be damaging.”

Now that Limbaugh has decided to evacuate, many on Twitter are pointing out the hypocrisy and irony of him leaving after making such a big deal about the warnings being a money-making scheme.

“Rush Limbaugh spent show mocking fears raised by scientists @ #Irma. People listen to that, they believe him. Now HE is evacuating. #shame,” one Twitter user said.

“Maybe we could ask Rush Limbaugh to broadcast his next few shows from a sailboat off the southern coast of Florida to test his theory,” chimed in another.

To have @rushlimbaugh suggest the warnings about #Irma are #fake or about profit and to ignore them borders on criminal. #ShameOnRush

Do not listen to @rushlimbaugh when he says #Irma is not a dangerous #storm and is hype. He is putting people's lives at risk

Reminder: our politics now dominated by crazy people who think everything bad is a leftist plot https://t.co/R0Dvdwnm7Y

Also Read: Comcast Will Have Weak Q3 Because of Hurricanes, EVP Says

So let's be clear, @rushlimbaugh literally put lives at risk by saying Irma was a hoax & now the stupid fool is evacuating because of Irma.???? https://t.co/9GDEwqEgOK

Did Rush Limbaugh ACTUALLY say HURRICANES are #FakeNews?
Yes he did.
Takes a lot of denial to be a Trump supporter.https://t.co/pMJEChpj9e

Rush Limbaugh spent show mocking fears raised by scientists @ #Irma. People listen to that, they believe him. Now HE is evacuating. #shame

Rush Limbaugh, a Palm Beach resident, says Irma and climate change are a deep state conspiracy. I hope science knocks his house down.

Hmmm…Rush Limbaugh also is not planning to return next week to his broadcast studio in Florida after the liberal hoax Irma sweeps through.

Maybe we could ask Rush Limbaugh to broadcast his next few shows from a sailboat off the southern coast of Florida to test his theory.

GOP think Rush Limbaugh knows more on climate than climatologists.
So, GOP, also use Rush for ur:
1. Chemo.
2. Surgery
3. Planes u ride on.