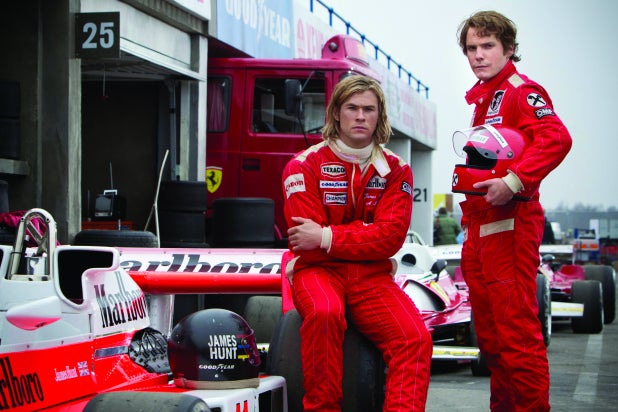 “Sexy” and “stylish” are not the adjectives that usually come to mind when describing the blandly middlebrow output of director Ron Howard. But whether it’s the racing cars (Howard’s debut effort was, after all, “Grand Theft Auto”) or the real-life daredevil drivers whose stories he’s telling, “Rush” finds the filmmaker at his most electrifying.

You’d have to go back to “Apollo 13” or even “Splash” to find Howard’s filmmaking instincts, pardon the expression, firing on all cylinders the way they do here.

Set in the glamorous and exceedingly dangerous world of Formula One racing, “Rush” examines the rivalry between two of the sport’s giants: James Hunt (played by Chris Hemsworth, “Thor”) of Great Britain and the Austrian-born Niki Lauda (Daniel Brühl of “Inglorious Basterds”).

Neck-and-neck rivals on the racetrack, the two couldn’t have been more different, apart from the fact that both came from distinguished families that didn’t support their racing dreams. Hunt drives recklessly and fearlessly while Lauda calculates the odds and manages the risks. Lauda has an overbite and a brusque personality (a great many of the film’s characters call him an a-hole at one point or other) while Hunt is sexy and charismatic.

Their rivalry begins in Formula Three racing and continues as both climb the ladder into Formula One. Lauda subverts the usual means of ascent by essentially buying his way in and then making himself invaluable by knowing how to design great racing cars, even insulting the handiwork of his eventual Ferrari sponsors to their face. Hunt follows suit, first with a posh backer (Christian McKay as Alexander Hesketh) and later with U.K. car manufacturer McLaren — per the film’s version of events, Hunt all but begs the company for a second chance on the track, mainly so he can face off with Lauda again.

The men risk injury and personal loss as they devote themselves to being the best at what they do, and by the time the two are facing off at the 1976 Japan Grand Prix for the world title, they are, in best sports-movie form, competing not only against each other but also against themselves.

Ron Howard‘s last collaboration with screenwriter Peter Morgan was “Frost/Nixon,” a movie with a bad habit of showing you, and then telling you, and sometimes even telling you again in case you missed it the first couple of times. With “Rush,” however, their storytelling has become much more streamlined and spare.

There’s a minor bit of narration from both characters bookending the movie, but for the most part, the script never slows down to walk us through this world or to explain the character’s motivations or to generate contrived drama. Scenes move along at a fast clip, but they communicate everything that viewers will need to know to stay engaged. Underlining the point is kept to a minimum.

The look of “Rush” is extraordinary, from the frequent use of close-ups (which turn the big and noisy sport of auto racing into something intimate) to the filtered, grainy cinematography that makes the movie appear as though it had been filmed in the mid-1970s, when most of it takes place.

Director of photography Anthony Dod Mantle (who already has one of 2013’s best-shot films under his belt with “Trance”) deserves the lion’s share of the credit, but the period details are perfection, thanks to the work of countless set dressers, hair and makeup people, and an army of digital wizards who no doubt had to erase satellite dishes and other contemporary anachronisms.

Also read: ‘Harry Potter’ Actor in Negotiations for Ron Howard’s ‘In the Heart of the Sea’ (Exclusive)

The film belongs to Brühl and Hemsworth, but there are some choice moments for Alexandra Maria Lara (“The Reader,” “Control”) and Olivia Wilde as Lauda and Hunt’s respective spouses. They, too, look like they just stepped out of 1975, but lucky for them and for us, the movie offers some progressive gender politics: both of these women understand their husbands’ need to cheat death on a regular basis, and neither clutches a hanky and tearfully begs their man to stay home and find a less risky line of work.

As for the male stars of “Rush,” they recall the line about how Ginger Rogers gave Fred Astaire sex, and he gave her class. Hemsworth’s matinee idol mug gets the prime placement on the U.S. poster, and he opens the film with a naked romp through the apartment of a turned-on nurse who has just sewn up one of his wounds. If Brühl doesn’t give the movie class, exactly, he does give it a heart and a brain, taking a character who races not for girls and glory but for the love of the sport and making him someone we care about and respect.

Neither character is stricken with one-dimensionality, however — we get to see the vulnerability beneath Hunt’s bravado and the charm hidden with Lauda’s determination.

The movie might have benefited from a tweak or two, whether in tightening the pacing of the third act or dialing down Hans Zimmer’s overblown score a notch, but overall “Rush” is an exhilarating surprise from a director who’s been playing it safe for most of his career. Like his heroes, he takes a risk and wins.