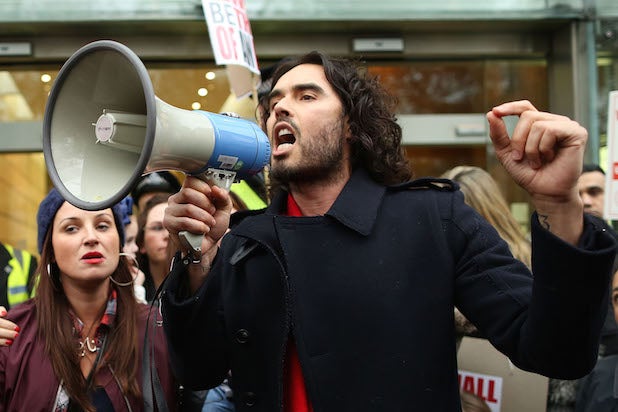 Hours before it screens at the Los Angeles Film Festival, Ondi Timoner‘s acclaimed Russell Brand documentary “Brand: A Second Coming” has been acquired by Ignite Channel, an independent distributor focused on theatrical releases of award-winning documentaries with strong cultural impact.

Ignite Channel will release “Brand: A Second Coming” in theaters across America, having purchased North American rights to the documentary, TheWrap has learned. Award-winning filmmaker Timoner (“We Live in Public”) turns her camera on Brand, the comedian, activist, and author who starred in the Judd Apatow productions “Forgetting Sarah Marshall” and “Get Him to the Greek.”

“Brand: A Second Coming” is presented by Interloper Films in association with Mayfair Film Partnership. The documentary, which received strong reviews as the opening night film at this year’s SXSW Film Festival, was produced by Timoner and executive produced by Andrew Antonio.

“Brand: A Second Coming” follows Brand as he dives headlong into drugs, sex and fame in an attempt to find happiness, only to realize that our culture feeds us bad ideas and empty idols. Through his stand up, Brand explores his own true icons — Gandhi, Che Guevara, Malcolm X and Jesus Christ. We follow his evolution from addict to Hollywood star to an unexpected political disruptor and newfound hero to the underserved. Timoner explores the contradiction between Brand’s clarion call for revolution and his hunger to transcend pop fame. Will Brand hold fast against the roar of criticism to break out of the very system that built him?

Timoner recently accepted the No Limits Award for “Brand: A Second Coming” at the Ashland International Film Festival and the Award for Excellence in Dramatic Storytelling from the Sarasota Film Festival. The documentary recently made its Australian premiere playing to a sold-out audience at the 2015 Sydney Film Festival.

“When we brought ‘Occupy the Farm’ to theaters around the country, we were surprised to hear Russell Brand mentioned by activists everywhere we went. Ondi Timoner‘s remarkable film captures Brand’s highly personal and often painful transformation from Hollywood star to progressive activist concerned with ordinary people standing up for justice in their communities,” Ignite Channel CEO Steve Brown said in a statement.

Brown told TheWrap that “Brand: A Second Coming” fits with Ignite Channel’s mission, but the company has no interest in adopting the day-and-date release model. “Going day-and-date really compromises the theatrical release. There’s something special about a shared experience, and it’s something that shouldn’t be lost. We decided we’re not doing any day-and-date and protecting theatrical. We’ll take that as far as we can and then do a VOD release later. That’s what has set us apart from other companies. Day-and-date might be the right strategy for some films, but films with a cultural impact that get people thinking deserve a theatrical release and that’s what we’re focused on,” said Brown, whose own notions about Brand were challenged by the documentary.

“I didn’t realize that Russell was involved in activist topics and when I saw the film Ondi had made about him, it was similar to the movies we’d been doing. I like stories that make us think about who we are and what matters most. Russell was living the Hollywood high life before changing course and becoming an advocate for ordinary people with no power and interesting social causes,” said Brown, who met with Timoner shortly after seeing the film.

“The timing was fortuitous, and we were able to step into a competitive situation due to the strength of our strategy, just as the producers were about to sell the film to another company. We are excited to collaborate on this fall release,” added Brown.

“I am thrilled we are taking ‘Brand: A Second Coming’ to a theater near you, as I have witnessed the way audiences react to this film together in a room and the passionate discussions that follow” said Timoner. “We at Interloper Films are also very excited to work with Steve Brown and his team at Ignite Channel in using innovative techniques with data and social media to identify and reach our audiences across the nation. I believe this release will be as trailblazing as the film and its subject are, moving the experience and efficacy of the documentary theatrical release to the next level.”

WME Global negotiated the Ignite Channel deal for “Brand: A Second Coming” on behalf of the film’s producers.

Ignite Channel’s award-winning documentaries “Twinsters” and “Poached” will both be released in theaters after they premiered earlier this year at SXSW. After a 50-city theatrical tour, “Occupy the Farm” will be available on Apple TV, Google Play, Amazon and VUDU as well as other VOD channels starting July 1. Based in the Bay Area and founded by Brown, the company’s “Socotra: The Hidden Land” continues to play in international film festivals. Brown’s first film, “Spark: A Burning Man Story” debuted at SXSW before its theatrical release in 2013, and has been widely viewed on Showtime, Netflix and on VOD.

Interloper Films is an award-winning full-service production company that develops and produces original feature-length documentaries and scripted films, cutting-edge web series and A Total Disruption, which is a new online platform for technological entrepreneurs. The company has been recognized for its work with two Grand Jury Prizes for Documentary Features from the Sundance Film Festival as well as a permanent display at the Museum of Modern Art in New York City, as well as a Grammy nomination. Interloper Films also produces the only talk show about documentaries in the world, “BYOD (Bring Your Own Doc)” for thelip.tv, which is hosted by Timoner.