The hip-hop mogul and co-owner of the RushCard reassured his users that they would have access to their money. “Card to card transfers are working,” Simmons tweeted Sunday morning. Thousands had been prevented from accessing their money and raised their concerns on social media.

Founded by Simmons in 2003, the RushCard is a pre-paid Visa Debit Card mostly used by “poor and working class Americans who cannot or choose not to establish traditional banking accounts,” according to a class action lawsuit filed Friday against Simmons’ UniRush Financial, Rush Communications, Meta Financial Group and MetaBank in US District Court in New York.

The RushCard allows users to have their paychecks or government checks directly deposited onto the cards or they can load money on the cards themselves and use them to make payments, buy groceries and withdraw cash from ATMs.

But earlier this month, the cards stopped working for some users who flooded social media with complaints. The affected cardholders said they were blocked from using their accounts. Others complained that their accounts had been deactivated or that money was missing and they couldn’t pay bills, buy food or put gas in their cars. 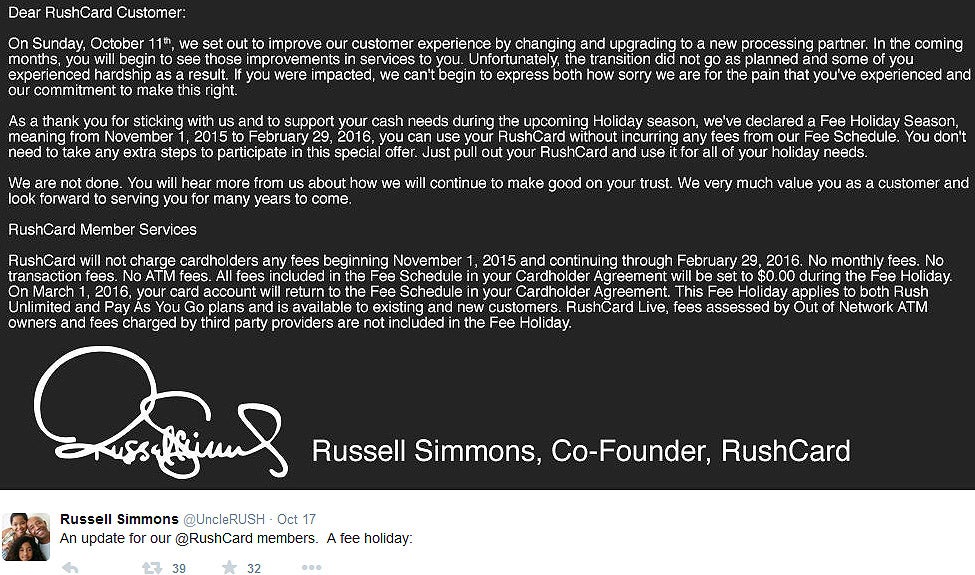 Simmons blamed the problems on a technology update. On Oct. 12, he wrote on the RushCard Facebook page: “Many of you were affected by our scheduled maintenance by our technology partner. I want to apologize for the inconvenience and frustration this disruption caused you. My team at RushCard is working to make sure you have the best access and service possible, and I thank you for your loyalty.”

On Oct. 21, another lengthy message was posted to the RushCard Facebook page and later on Twitter saying they were still trying to iron out the problems: “Last week, some customer’s direct deposits were returned to your payroll or government benefits administrator as a result of inaccurate account information. We have put in new processes to review all incoming deposits beginning this week to ensure deposits are posted in a timely manner.”

By then, five cardholders said they’d had enough and filed the class action lawsuit.

The suit states that on or about Oct. 11, “some RushCard customers received notice, by text message, that RushCard would be updating its system” for five hours and customers would be unable to access their accounts.

However, the suit says the problems continued for nearly two weeks “with customers locked out” and many “still have not regained access.”

The plaintiffs are seeking “damages and injunctive relief based upon the unlawful conduct of Defendants in denying such account holders the ability to obtain funds in their accounts and in misappropriating funds held in the RushCard accounts.”

On the same day that the lawsuit was filed, the Consumer Financial Protection Bureau announced it was launching an investigation.

“The CFPB is taking direct action to get to the bottom of this situation that may have harmed thousands of innocent consumers already,” Director Richard Cordray said in a statement. “The CFPB has also engaged in discussions with fellow regulators, including the Office of the Comptroller of the Currency and the Federal Trade Commission, to ensure a comprehensive response that addresses the situation quickly and holds accountable all of the parties involved to make consumers whole.”

Despite the federal inquiry, Simmons said RushCard backers did nothing wrong.

“Honestly excited to see investigations beginning they will expose our operation as squeaky clean,” he tweeted Saturday morning.

TheWrap was scheduled to interview the music mogul on Saturday, Oct. 24, in Santa Monica where he was slated to host an art competition, however he was a no show. “Russell’s team informed us 20 minutes ago that he had something come up and he would not be able to attend,” a spokesperson said at the event.