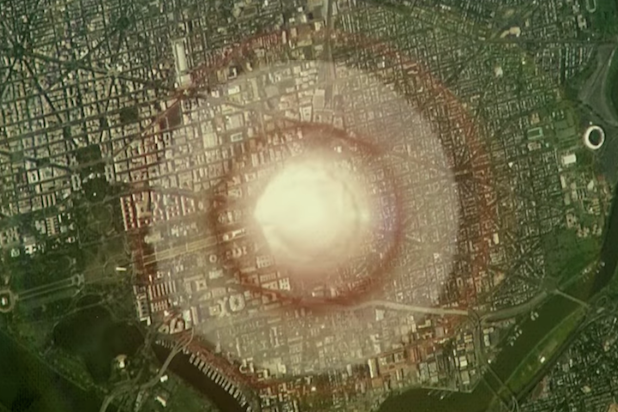 On Tuesday, Russia’s English-language news agency Sputnik decided to treat viewers to a video simulation of what a nuclear explosion might look like in Washington, D.C.

Ground zero? The White House — which the Kremlin-backed news agency tagged in the tweet for good measure.

“What if a nuke, powered by five kilograms of highly enriched uranium, earlier acquired by terrorists , goes off near the White House?” asked an unbylined article which accompanied the tweet. “This question has bothered experts for a long time.”

The article was based on a YouTube video uploaded by Science Magazine several days ago, which imagined the nightmarish scenario “modelled by experts.”

While the article was a basic aggregation from Science Mag, it’s hard not to suspect a bit of typical Kremlin trolling in the story choice.

While President Donald Trump has gone out of his way to pursue friendly relations with Russia, the relationship has continued to sour throughout his presidency.

After a former Russian spy was the victim of a nerve agent attack in Britain earlier this month, Trump, in concert with several European allies, united to expel dozens of Russian diplomats. Russia — of course — has denied any involvement in the strike that nearly killed Sergei Skripal and his daughter, Yulia.

The president has also clashed with Russia and his counterpart there, Vladimir Putin, over the recent chemical weapons attack in Syria. Trump called out the country in a tweet, accusing him of supporting Syrian dictator Bashar al-Assad — a man he also called a “Gas Killing Animal.”

Russia vows to shoot down any and all missiles fired at Syria. Get ready Russia, because they will be coming, nice and new and “smart!” You shouldn’t be partners with a Gas Killing Animal who kills his people and enjoys it!