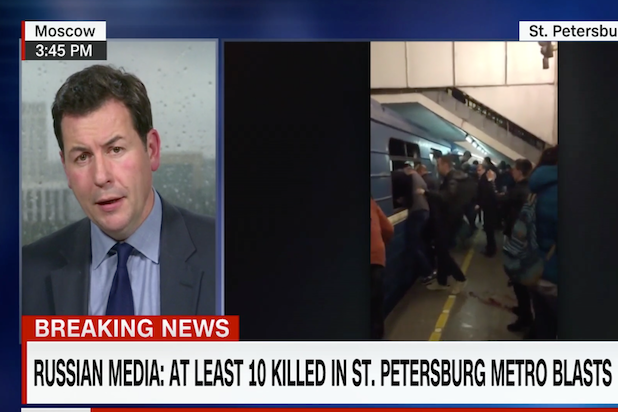 An explosion on public transportation has rocked the Russian city of St. Petersburg on Monday killing 10 people, according to Andrei Kibitov, spokesman for the St. Petersburg governor.

Law enforcement agents have found and defused another explosive device on the subway, according to a spokesman for Russia’s top anti-terror agency.

Russian President Vladimir Putin said investigators were looking into whether the explosion was a terror attack or if something else caused the explosion. Senator Viktor Ozerov told Russian news agency Interfax that the explosion is likely a terrorist attack, according to the Associated Press.

“The reasons for the explosion are unknown, so it’s too early to talk about it. The investigation will show what happened,” Putin said, according to CNN. “Naturally, we always consider all options — both domestic and criminal, primarily incidents of a terrorist nature.”

Breaking in the Metro of ST #Petersburg there was an explosion there are victims.#Russia. pic.twitter.com/Gw95a8fp6x

The explosion took place on a metro car at the Sennaya Ploshchad station — at least 50 more people are injured, according to Kibitov. Some young children are among the victims, per CNN.

“I was going going down the escalator at Sennaya square at about half past 2, and at that moment I felt an explosion wave underneath. Everything was filled with smoke, people started panicking. So the trains stopped and almost immediately the evacuation started,” a witness told CNN.

Putin expressed his condolences and was in the area earlier in the day, state-run news organization TASS reported. Kremlin spokesman Dmitry Peskov said Putin is now in the nearby city of Strelna.