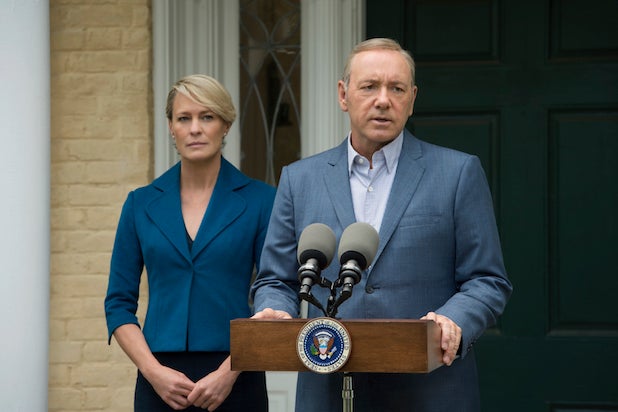 Former members of an infamous troll farm — operating under the aegis of one of Vladimir Putin’s closest comrades — said in a revealing interview on Rain, a Russian TV channel, that Netflix’s political drama “House of Cards” was required viewing to help train the agents on hot-button issues in American political culture.

“At first we were forced to watch the ‘House of Cards’ in English,” a former peddler of fake news identified only as Maksim told the station. “It was necessary to know all the main problems of the United States of America. Tax problems, the problem of gays, sexual minorities, weapons.”

The Netflix hit show was one ingredient in the Russian’s attempts to better understand how to communicate like real U.S. citizens, according to Yahoo reporter Michael Isikoff.

The troll group, called the Internet Research Agency, would post comments on articles from the New York Times and Washington Post, aiming to rile up a targeted set of American voters. A prime objective was diminishing Democratic candidate Hillary Clinton’s standing and emphasizing her past “corruption scandals,” as Maksim put it.

“The main message is: Are not you, my American brothers, tired of the Clintons? How many have they already been?” said Maksim, adding that President Barack Obama was also targeted. “We had a goal to set up the Americans against their own government to cause unrest, cause discontent [and] lower [President] Obama’s rating.”

The IRA — believed to be owned by Evgeny Progozhin, a rich restauranteur dubbed “Putin’s chef” — took its meddling very seriously. Trolls were graded on comments that racked up “likes,” and were upbraided if they failed to cover their Russian IP tracks.

And a steady dose of “House of Cards,” starring Kevin Spacey as a corrupt politician unafraid of murdering his opponents, was a key piece of its arsenal.

Maksim pointed to topics especially inflammatory in the U.S., including gay rights and gun control, as areas the Russian agents could aim to “rock the boat.”

“When it was gays, we almost always had to bring out the religious themes,” said Maksim. “Americans are very religious, especially those [who post] on news sites and write comments. You had to write that sodomy is a sin. That could always get you a couple of dozen ‘likes.'”

For stealth Russian commenters, that was gold.