Russian trolls targeted black Americans on social media with conspiracy theories and salacious headlines, aiming to sow dissension and drive them away from voting in the 2016 U.S. election, according to a report released by the Senate Intelligence Committee on Monday.

The Kremlin-funded Internet Research Agency (IRA) leveraged Facebook and Instagram accounts — some with tens of thousands of followers — to sway black voters away from voting for Hillary Clinton and help Donald Trump win the presidency. Some IRA accounts recruited oblivious activists to spread and create content, as well as host rallies, according to the report, which was spearheaded by Austin-based cybersecurity firm New Knowledge, in conjunction with Columbia University and Canfield Research Group.

“The most prolific IRA efforts on Facebook and Instagram specifically targeted black American communities and appear to have been focused on developing black audiences and recruiting black Americans as assets,” the report said.

Also Read: Facebook Fact-Checking Effort on the Rocks After Journalists Speak Out (Report)

While the IRA trolls made accounts to influence several different ethnic and religious groups, it’s most ambitious plans were focused on black voters, with dozens of social media accounts dedicated to the community. The biggest Russian troll account on Instagram was @Blackstagram, with more than 300,000 followers. The account shared memes and potentially made money off e-commerce, the report said.

In addition, the IRA advocated “black voters stay home, or vote for Jill Stein.” The accounts shared content with inflammatory titles like “HILLARY RECEIVED $20,000 DONATION FROM KKK TOWARDS HER CAMPAIGN,” according to the report.

The IRA “exploited the trust” of their “audiences to develop human assets, at least some of whom were not aware of the role they played. This tactic was substantially more pronounced on Black-targeted accounts,” the report said.

The IRA also covertly launched a network of websites, appearing to be led by black Americans, to spread misinformation. Black Matters, one of the IRA-created sites, “focused on building community — and sowing division — in real life as well as online,” according to the report. The site posted job ads for American writers to contribute to blackmattersus.com — content that would routinely be recycled on its Facebook account, which boasted more than 100,000 followers, and several other social platforms.

Some of the black-targeted groups were hit with bizarre historical conspiracies “intended to reinforce cultural identity as well as create discord.” Three regularly shared memes were: that William Shakespeare’s plays had actually been written by a black woman; that Wolfgang Amadeus Mozart was black; and that the U.S. government had rejected the likeness of a black woman in return for a more “white-looking” Statue of Liberty from France. 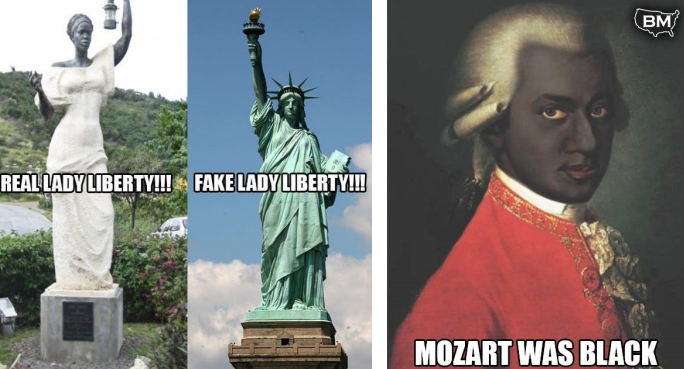 Two of the strange memes circulated by Black Matters

Aside from Russia’s emphasis on black citizens, the report shines a light on the Kremlin’s broad effort to meddle in American society, touching on a myriad of issues, from gun control to immigration to the public’s trust in the mainstream media.

Since the 2016 election, Facebook has faced the brunt of criticism for its inability to thwart Russian meddling, but Instagram — which is owned by the social network — turned out to be an even bigger asset. The report found 187 million interactions with IRA content on Instagram between 2015 and 2018, compared to 77 million interactions on Facebook and 73 million on Twitter.

As American journalists increasingly investigated how Russian trolls used Facebook, the IRA deliberately shifted its efforts away from the social network and towards Instagram, according to the report.

Also Read: Instagram Cracks Down on Phony Comments and Follows

“Instagram was a significant front in the IRA’s influence operation, something that Facebook executives appear to have avoided mentioning in Congressional testimony,” the report said. Facebook executives, testifying to Congress last year, said about 146 million Americans had been exposed to Russian propaganda on Facebook and Instagram.

This issue hasn’t been curbed, according to the report, which added: “Our assessment is that Instagram is likely to be a key battleground on an ongoing basis.”