Matt Hutchins, the husband of the late cinematographer Halyna Hutchins, has addressed Alec Baldwin’s Dec. 2021 ABC interview where the actor said he was not to blame for Halyna’s death.

In an interview with “Today’s” Hoda Kotb, which aired on Thursday, Matt Hutchins was asked by the host about Baldwin’s remarks last year, summing up the actor’s comments in his ABC sit-down as “essentially, he felt grief, but no guilt.”

“Almost sounds like he was the victim, and hearing him blame Halyna in the interview and shift responsibility to others and seeing him cry about it, I just feel like, are we really supposed to feel bad about you, Mr. Baldwin?” Matt Hutchins told Kotb.

Halyna Hutchins was killed on the set of “Rust” on Oct. 21, 2021 when a gun held by Baldwin discharged and fired what authorities said was a live lead projectile. The Santa Fe County Sheriff’s Office is continuing its investigation and has not filed any charges yet. 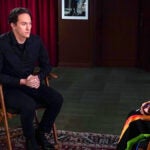 Baldwin gave an interview to ABC News on Dec. 2 saying that he never presumed that there could have been a live bullet in the gun. He added that he did not pull the trigger of the gun when it misfired and described how Hutchins had instructed him to handle the weapon in the rehearsal. Baldwin also said during that interview that he was not to blame. “Someone is responsible for what happened … but I know it isn’t me,” Baldwin said at the time.

Following Halyna Hutchins’ death, Baldwin was seen meeting up with Matt Hutchins and his son. The two were seen embracing, and Kotb asked the widower about that moment.

“I feel like to understand that moment you have to remember the shock we were in and I spoke with Mr. Baldwin and was just looking for a way through the storm,” Matt Hutchins said in the interview that aired Thursday.

Asked if Baldwin seemed distraught during that time, Matt Hutchins replied, “There were a lot of emotions, for sure. On both sides.” 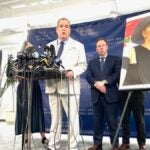 In Baldwin’s own interview last year, he also addressed the meetup that included a meal, telling ABC’s George Stephanopolous, “I didn’t know what to say. He hugged me and he goes, ‘I suppose you and I are going to go through this together.’ And I thought, ‘Well, not as much as you are,'” adding, “I think to myself, this little boy doesn’t have a mother anymore. And there’s nothing we can do to bring her back.”

“I told him, I said, ‘I don’t know what to say; I don’t know how to convey to you how sorry I am and how I’m willing to do anything I can to cooperate,’ ” Baldwin also added.

Matt Hutchins has since filed a wrongful death civil lawsuit against Baldwin, his fellow “Rust” producers and other members of the film’s crew.

Asked by Kotb what justice looks like, Matt Hutchins said: “We’re pursuing justice every way we can in the sense of going through this process together and with the lawsuit seeking to hold accountable the people who are responsible for Halyna’s death, which was totally preventable.”

Watch more of Kotb’s interview below: