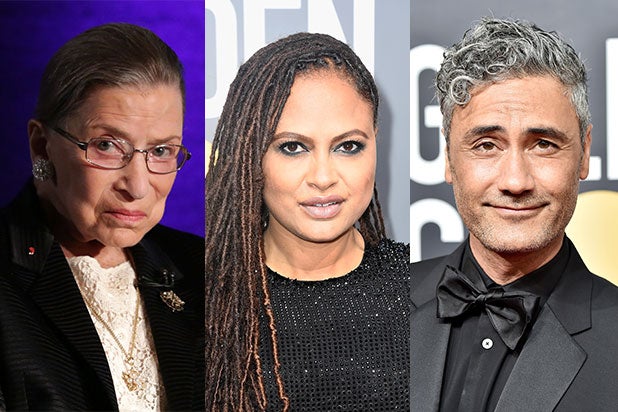 Supreme Court Justice Ruth Bader Ginsburg, Ava DuVernay, Issa Rae, Catherine Hardwicke and Taika Waititi are heading to the 2018 Sundance Film Festival to discuss their work and the power of media, it was announced Thursday.

DuVernay, Patrick Gaspard, Rae, Megan Smith and Christine Vachon will speak on a panel titled “Power of Story: Culture Shift” to talk about their work as well as the role of creative choices in our ever-shifting culture. The conversation will be led by Washington Post journalist Sarah Ellison on Jan. 19.

Hardwicke, Waititi and Justin Lin will talk about the advantages and challenges of moving from independent filmmaking to big-budget studio films with moderator John Horn on Jan. 26, on a panel titled “Power of Story: Indies Go Hollywood.”

Other noteworthy conversations at the festival include talks between will.i.am and Kevin Smith; Danny Elfman and Gus Van Sant; Justice Ginsberg and Nina Totenberg; Ira Glass and Miranda July; and Ethan Hawke and Rupert Everett.

A Celebration of Music and Film will present an evening with Joan Jett who will take the stage with The Blackhearts on Jan. 20, in celebration of the premiere of the documentary “Bad Reputation.” Other live music at the festival will include performances by Michael Franti, Brett Dennen, Mr. Hudson, Ruelle, Ethan Gruska and Striking Matches.

The Sundance Film Festival will take place from Jan. 18-28 in Park City, Utah.