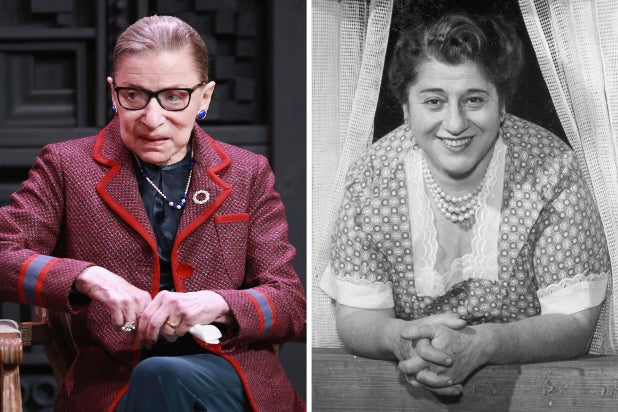 Years ago, when I was working on a documentary on sitcom television pioneer Gertrude Berg, aka Molly Goldberg, I attended a reception at the French ambassador’s residence in Washington, DC. I spotted Justice Ruth Bader Ginsburg by the desserts and decided to make a bold casting move. (Editors note: Molly Goldberg was the matriarch of  “The Goldbergs,” a radio program turned early TV sitcom.)

I went up to Justice Ginsburg, whose opinions I so admired, and on a whim asked her if she had listened to “The Goldbergs” in her youth. She answered in the affirmative, and then I requested if she would be willing to be interviewed for “Yoo-Hoo, Mrs. Goldberg.” Without missing a beat, she said enthusiastically yes.

We filmed her interview at the Supreme Court, for which she wore a beaded collar that she proudly explained had been given to her by women in South Africa.

Turns out that Gertrude Berg, who wrote, produced, and starred in “The Goldbergs” on radio and television, was clearly a role model for Justice Ginsburg in her youth.

She explained how in her Flatbush Brooklyn home her whole family listened to the show. “When I was growing up there were not many what we today call role models. There were very few women out there doing things because the prevailing view was that if a woman worked, that was a reflection on her husband, that he wasn’t able to be the family breadwinner. But there were occasional people who didn’t fit that mold and Gertrude Berg, was surely one of them.”

Justice Ginsburg credits the Molly Goldberg character Berg created as being “no shrinking violet. She was an assertive woman, and for girls growing up at my time, Molly Goldberg had that quality. She cared about her children, she wanted them to have opportunities that she didn’t have and that was the way of thinking in the Jewish community. Parents wanted their children to have opportunities that they didn’t have themselves.” 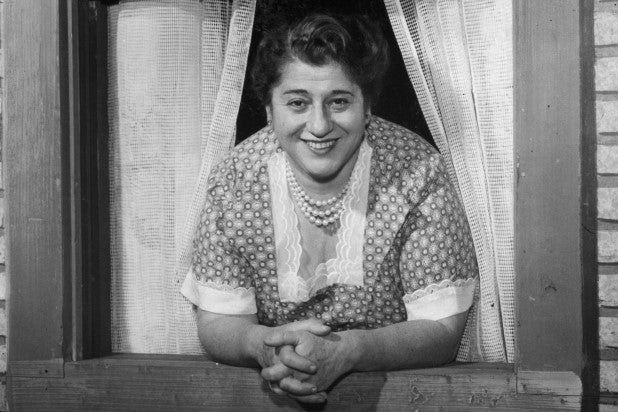 Justice Ginsburg also delighted in telling the story of arguing a case before the Supreme Court where her last name converged with Molly. She recalled “as an advocate for the equal rights and responsibilities of men and women I recall vividly my second argument at the court. Justice Marshall, who could be a pretty tough questioner, looked at me and said, ‘Now, Mrs. Goldberg…’ I hesitated. Should I correct him? I said, well, it’s a compliment in a way, that he picked Mrs. Goldberg as a Jewish woman who was, if I may use the expression, was a mensch.”

Justice Ginsburg concluded, “When Justice Marshall called me Mrs. Goldberg, he probably had in mind that Mrs. Goldberg was the Jewish woman who came into homes all over America, whether Christian or Jewish, everyone knew and loved Molly Goldberg.”

Her answer to the shoot’s last question about how she was, like Molly, a role model today, clarified her philosophy in life. Justice Ginsburg observed “the similarities between me and Molly Goldberg is a little like a question I’m often asked, how are you like Justice Sandra Day O’Connor? And my answer is, well in appearance we’re very different. She’s tall and I’m small, Molly Goldberg was large and I’m on the petite side, but in our readiness to speak our minds on questions that we think are important, our refusal to be put down by others, our use of every put-down as an occasion not to become angry, not to become resentful, but to say, he’s a person who doesn’t understand, and I have an opportunity to educate that person. You can do that only by having a sense of humor, by remaining calm, and never reacting in anger.”

Filming Justice Ginsburg at the Supreme Court was an extra bonus for me since I was a law school graduate. But after I had flunked the bar twice, after being deficient at answering multiple-choice questions. I turned to filmmaking.

The night after filming I emailed everyone I knew from law school telling them I had filmed Justice Ginsburg that day and fulfilled a dream of making it to the Supreme Court but “just doing it my way.”