Those pledge drives just won’t be the same without her signature New York harangue, but  KCRW general manager Ruth Seymour has announced she will retire at the end of February after 32 years in the post. 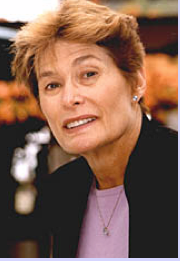 The public radio station reported the news on the air on Wednesday morning.

She is also known as having a feisty temperment and a highly personal, spur-of-the-moment style, one that has led to some high-profile arguments (notably with  humorist Sandra Tsing Loh) and the nickname, "Lady of the Iron Whim."

In a letter to employees Tuesday night and one to station supporters going out Wednesday morning that were obtained by LAObserved.com, Seymour said after 32 years, she was leaving the station on an up note.

Seymour and her then-husband, Jack Hirschman, were early public radio programmers in the early 1960s, at KPFK.

A profile of her at Current.org recalled that after two years, they "left for Europe and embraced the bohemian lifestyle. She returned to the station in 1971, became program director and survived Pacifica’s withering internal politics until 1977, when she says she and general manager Will Lewis were driven out in one of the network’s all-too-familiar coups."

After that, Santa Monica College hired Seymour to resuscitate KCRW, which at the time was an eclectic-format station sitting on a middle school playground. "You opened the door from the swings into the studio," she told Current.

The station’s licensee, Santa Monica College, has begun the search for Seymour’s replacement.

KCRW GENERAL MANAGER RUTH SEYMOUR ANNOUNCES RETIREMENT
Santa Monica, CA….After 32 years as General Manager of Santa Monica College’s public radio station KCRW-89.9 FM and www.KCRW.com, Ruth Seymour has announced that she is retiring at the end of February.
“I am leaving a station that is strong in its identity, a station like no other in the country,” says Ms. Seymour. “It’s been an extraordinary privilege to serve as KCRW’s General Manager – a joy and source of great pride. That’s a pretty good note on which to say goodbye.”
She arrived at the station in September 1977 as a consultant and was formally appointed manager several months later.
Ms. Seymour has overseen the transformation of a station originally located in a middle school playground, with the oldest transmitter west of the Mississippi. Today KCRW’s 13 transmitters deliver its broadcast service to much of Southern California.
Online, the station has one of the largest audiences of any American radio station, providing three discreet program streams 24/7 at KCRW.com. KCRW’s 26 podcasts are downloaded 1.2 million times monthly.
Ruth Seymour also serves as the station’s Program Director. KCRW is recognized for its original award-winning programs in news, music and culture. The station’s schedule features its signature music show Morning Become Eclectic and its daily news-based broadcasts of To the Point and Which Way, L.A.?.
KCRW produces more national programs than any other public radio station. Its six series are broadcast collectively by stations throughout the country, including New York, Washington, D.C and Seattle.
Ms. Seymour is also a familiar voice to KCRW’s listeners. She often hosts The Politics of Culture and has led the station’s on-air Subscription Drives.
She credits KCRW’s large and loyal subscriber base for enabling the station to engage in ambitious productions and important digital ventures. “We have forged a strong bond with our listeners, one of trust and affection. They have come through for us time and time again.”
Santa Monica College, the station’s licensee, will engage in the selection process to choose Ms. Seymour’s successor. The College expects that it will take several months to complete.
x
Looks like you're enjoying reading