(Warning: Spoilers ahead through Episode 4 of Peacock’s “Rutherford Falls.”)

“I will not rest until my nation gets every single thing that was taken from them.” That’s how “Rutherford Falls” character Terry Thomas (Michael Greyeyes) ends his three-minute monologue to reporter Josh Carter (Dustin Milligan) after the Native American casino owner is asked if he’s “selling out his culture” by “chasing the almighty dollar.”

It’s a powerful moment in the fourth episode of the new Peacock comedy, which was co-created by Mike Schur, Sierra Teller Ornelas and star Ed Helms. And Ornelas, a Mexican-American member of the Navajo Nation, said the scene gets to the heart of a matter she wanted to hit home with the series: that Native American people are “not a monolith.”

“There are over 500 Native tribes and we all have our own nations, separate governments, cultures, languages, just like everybody,” Ornelas told TheWrap. “With the five Native writers [on ‘Rutherford Falls’], including myself and Jana [Schmieding, who co-stars with Helms], we all had many similar experiences but know Native people with different opinions on topics like tribal capitalism.” 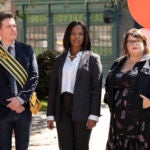 Ornelas, who previously wrote for comedies like “Superstore” and “Happy Endings,” said the key to Terry’s speech about casinos was “a resonance that every Native has wanted to do that, and does do that sometimes.”

“Like the, ‘Let me just break it down for you, because what you think this is is completely different than what it actually is,'” she continued. “We spend a lot of time, the Native writers especially, crafting that and talking about the fact that a lot of Native people are very critical of capitalism, and rightfully so. I think there are a lot of very entrepreneurial Native people. We’re not a monolith. Even within a tribe, there’s so many different types of Native people. One of the writers, Tazbah Chavez, brought up the concept of tribal capitalism and [how] that is different than traditional capitalism. And that led to this really interesting conversation.”

With all of those themes in mind, Ornelas said she aimed to “serve an emotional story for this character, Terry, who is a human person.” 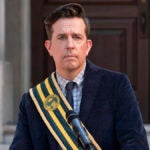 Also Read:
‘Rutherford Falls': Mike Schur on How It’s Even Possible Big Larry’s Statue Is in the Middle of a Road

“We talked a lot in the [writers’] room about the Terry Thomas character having these monologues throughout the season. When we found Michael [Greyeyes, who is Nêhiyaw from Muskeg Lake Cree Nation], we were like, ‘Oh, thank God,'” Ornelas said. “I will say, across the board, there was [such] an abundance of Native actors that we had too many options for each role. But meeting Michael and throwing him those monologues and seeing him do it, you were like, oh, you can write anything for him. Like, we can really just see how far we can go.”

“And then I think a lot of times, the idea of casinos in Native communities is seen one way by non-Native people, and it’s never very positive,” she added. “What we tried to do on the show was talk about [how] some Native people like casinos, some people hate them. Some people see them as just a job. That complexity was always important to us. I think on most shows, a character like Terry Thomas would just be very flattened and would be a villain and just sort of written off as cold and calculating. It was very important to us to really show that every character on the show believes that they’re doing what’s best for their community and what they think is right. We really wanted to give a backstory to him so that you could never, ever write that character off as simply one thing.”

You can read more from TheWrap’s interview with Ornelas here.