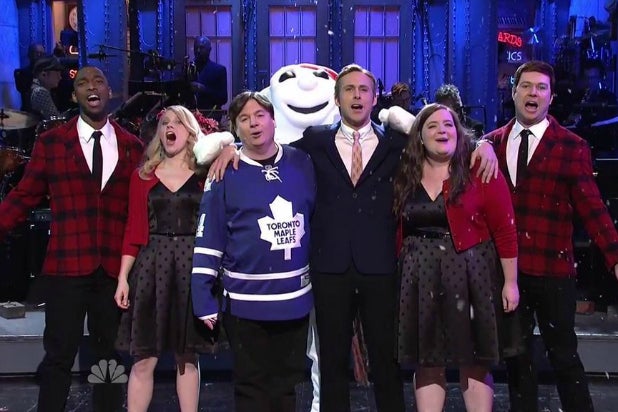 Ryan Gosling turned in an acceptable “Saturday Night Live” hosting debut, but the appearance was rife with exactly the types of drawbacks that you’d imagine with somebody like him — too much reliance on the whole “holy crap, this guy is so damn hot!” joke, and a few too many crackups. The material throughout the show was also not quite up to par with previous episodes this season.

The cold open featured Taran Killam and Cecily Strong as the Trumps. Sure, these actors nailed their impersonations, but the joke of The Donald reciting a naughty and nice list was a lightweight laugh.

Gosling began his monologue with a shoutout to Brooklyn, until Strong (as an audience plant) called out his Canadian origins. He reluctantly admitted he’s a Canuck, which opened the door for a  cameo from Mike Myers, wearing a Maple Leafs jersey, and proclaiming the glory of the Great White North. The two sang a song about Canadian accents. The laughs were light, but the cameo quotient plus the hunk quotient was high enough to make it tolerable.

As far as Gosling’s promise at this point in the show, it was still high. The 35-year-old actor isn’t exactly known for comedy, but neither was Alec Baldwin the first time he hosted “SNL.”

Next up was a commercial parody featuring the “SNL” ladies, who in the past few years have really been kicking ass when they get together.

The product in question: Settl, an online dating app for when you realize you’ll never get all the things you really want in a relationship. This bit was also light on the laughs. It wasn’t unfunny. It’s just that the jokes weren’t as sidesplitting as “Do It in my Twin Bed.”

Everyone in the next sketch was on the verge of laughter, and rightfully so. This will be the most quoted sketch of the week. Kate McKinnon owned it, as she often does, playing a woman being interviewed by the NSA about being abducted by aliens. She didn’t have quite the joyous life-affirming experience that her co-abductees had. Some of sample hilarity: “They just stared when I peed. I don’t think I was dealing with the top brass. …. My coot coot was out. I was full-on Porky Pig-ing it in a drafty dome.”

“Santa Baby,” a filmed sketch about a new-to-the-neighborhood couple who still believe in Santa was also a hit. Vanessa Bayer and Gosling played the inappropriately affectionate couple convincingly and uncomfortable

The momentum stalled with the next sketch; a teenage girl sleepover birthday party with Gosling playing a dad who is embarrassing and dorky to everybody except Aidy Bryant’s Melanie character. “Wow. I guess everybody knows how dirty I am. Do you like that, Mr. Dilham?” she teases him. He does not like that one bit though. The sketch started strong, with a promising game, but it ended up feeling too much like a formulaic mashup of Melissa McCarthy’s Arlene the Office Flirt and Chris Farley’s Matt Foley. Also, Gosling lost some points for messing up the name of Bryant’s character midway through.

Leon Bridges is more than just the latest in a long line of 20-somethings to invent a persona based on this grandparents’ record collection, but he didn’t do that much to prove it with his performance of “Smooth Sailin’.” There are much stronger songs on his debut, “Coming Home,” most notably the title track, which he’ll inevitably play for his second number. But c’mon, man! Lead with your best foot forward.

“Weekend Update” began with the usual “GOP candidates are such dummies” jokes. While all of the examples anchors Colin Jost and Michael Che provide were true, these guys have the ability to be above that. And when they go for bi-partisan laughs is when they do their best. “We’re a country that is about to be four-deep into the Chipmunks franchise,” joked Jost. Damn. That smarts!

Strong came out for a guest segment as a magazine columnist who was scheduled to be on the show to talk about tech gadgets for the holidays, but ended up just flirting with Jost. Some of what Strong does best is to invent characters that you didn’t know you knew, but are so recognizable as soon as you see them. Bobby Moynihan’s secondhand news reporter Anthony Crispino came out to do his usual fare as the guy who reports the second-hand news. It was funny, but he didn’t bring anything new to it. But then Gosling proved his comedy worth as Crispino’s “third-hand news guy,” misinterpreting “Star Wars: The Force Awakens” for “Star Wars: The Four Jamaicans.” But the best joke of the segment award goes to Michael Che for a joke about how Fox News might have interpreted NBC’s production of “The Wiz.”

The next sketch was a good callback to the bit in the monologue, where Strong gave Gosling flak for being from Canada. In this sketch, she played a GQ reporter, interviewing Gosling in a bar in his hometown. But then Kyle Mooney waltzes over and harasses him, calling him “cryin’ Ryan.” This sketch ended up being the best summation of what was wrong with this episode though. It relied too heavily on the “isn’t he hot?” bit and Gosling had a tough time keeping from laughing.

Next up was a commercial parody of the Danny DeVito/George Clooney Nespresso commercial. But it’s more like a tribute than a parody. Moynihan and Killam do great DeVito and Clooney, respectively, but it’s a shot-for-shot recreation of the original spot with too few adjustments.

What should have been Gosling’s star turn of the evening came during what was billed as an exclusive cut-for-time scene from “The Wiz.”  Gosling played the original Scarecrow from “The Wizard of Oz” doing an “If I Only Had a Brain” that has no soul, the other characters mock him roundly. There was a lot of potential with this set-up, but it never delivered beyond Gosling’s mawkish delivery.

Turns out Leon Bridges didn’t play “Coming Home” at all, but his second appearance, playing the sweet gospel number, “River” was the stuff of goosebumps.

The final sketch of the evening, flirty elves who just want a little bit of S&M expressions of appreciation from Santa is a great setup, but we’ve seen these naughty elves before, and once you know what’s going on here, the joke just isn’t as funny. Despite this, more crack-ups abound with the cast. Hey, even if people watching this episode on their couches didn’t laugh that much, at least the cast did.