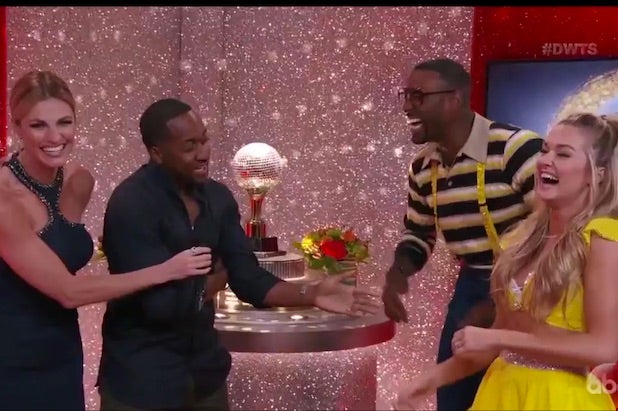 No one was tackled, arrested, broke a bone or otherwise created an embarrassing scene, but “Dancing With the Stars” still had viewers chatting away on social media Sunday night as celebs and pros tangoed and paso dobled across their screens.

Famous faces and names also joined in on the fun, including a few who jumped on the “vote for my friend” bandwagon:

Super proud of @kramergirl on #DWTS tonight! She killed it! Everyone vote vote vote!!!!!

Ryan Lochte received both praise and pause from viewers:

Okay @dwts, we get it. There was a situation last week. Stop milking it for drama. #dwts

@RyanLochte give it your all buddy! Don't let anything let you down #DWTS @Dancingabc

When Vanilla Ice has to give you a pep talk, you’ve hit rock bottom, Ryan Lochte.#DWTS #RyanLochte

@RyanLochte and @CherylBurke it was nice to see the fun and the good energy after last week! I loved the performance ❤️️???????? #DWTS

While fans of the show rallied around their favorites:

Oh….Laurie Hernandez is probably too young to know what Duck Tails is. I'm 100 years old. #DWTS

I'm crying @SashaFarber and @TerraJole going across the camera with the pitchfork !! Literally lost it both times!! #dwts

Another found a way to party their way through the two hours:

But Twitter went really crazy when dance pro Sasha Farbo made a rather awkward language faux pas that left the audience — and the judges — gasping: